“Fairies are always on your side, Spyro.”
—Mudada

Mudada (マンダ=ドリフーチョ Manda in Japanese) is a Dream Weavers dragon who first appeared in Spyro the Dragon, found in Lofty Castle. After rescuing the first three fairies, they open a Whirlwind to send Spyro over to Mudada.

In the Spyro Reignited Trilogy, Mudada is sitting down and playing with a fairy doll instead of standing up. He wears a blue vest, both his wings and horns are made of plush-material. He also has a plush star hanging at the tip of his tail. 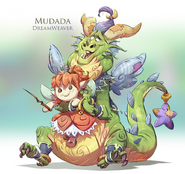 Retrieved from "https://spyro.fandom.com/wiki/Mudada?oldid=123102"
Community content is available under CC-BY-SA unless otherwise noted.