“Munitions Forge is an island dominated by Boyzitbig, an unstable volcano that makes life on the surface very dicey. The locals, who live underground, have been forced to mine the metals that Cynder uses to forge her army's weapons. They're called Manweersmalls.”
—Ignitus

Munitions Forge is a hot lava pit infested island far away from the Dragon Temple, only appearing in The Legend of Spyro: A New Beginning.

Hot ash and sparks fall from the sky caused by the active volcano, Boyzitbig. It is also a massive mine due to the large amount of volcanic metal. The inhabitants of this island are the Manweersmalls, bipedal moles who spend their lives underground, mining for metal. It is also home to Magma Worms, Buffalo Beetles, and Fire Beetles. This is also where Spyro learns his Earth breath.

During the war between the Dragons and the Dark Armies, Ignitus stood his ground defending Munitions Forge from the scourge of the Apes. Years later, Spyro would travel to the polluted Munitions Forge to save Terrador from Cynder's forces as the volcano Boyzitbig was preparing to erupt. Spyro was asked by Mole-Yair to save his people, who were imprisoned and/or enslaved by the Apes. After saving the Manweersmalls, Spyro found Terrador but he had to defeat an impeding Ape called the Conductor and his steam locomotive, Steam. The young dragon saved Terrador, but Cynder arrived and started to chase Spyro after retrieving the crystal that was used to sap Terrador's power. Spyro escaped seconds before the volcano erupted, but Cynder was still chasing him down. Ignitus intervened and attacked Cynder to save Spyro, but became captured in the process. Spyro wished to go back and help him but Terrador told him that they would never find Ignitus and Cynder in the chaos, and he was not ready to face Cynder yet. So Spyro decides to go rescue Ignitus at Cynder's Lair after Terrador taught him how to use Earth breath back at the Dragon Temple.

The train station within Munitions Forge

The inner area of the Forge 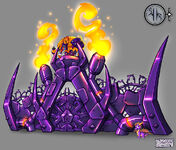 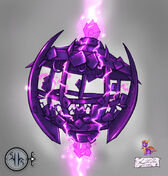 The Cage that contained Terrador 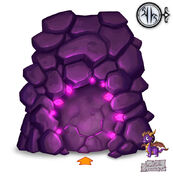 A rock wall in Munitions Forge

The old, small temple where Spyro would gain his Earth element 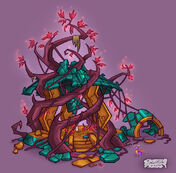 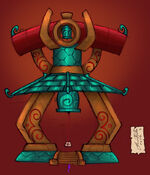 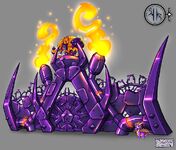 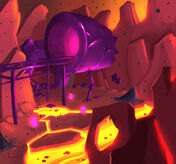 Gateway for the train Steam

Retrieved from "https://spyro.fandom.com/wiki/Munitions_Forge?oldid=116840"
Community content is available under CC-BY-SA unless otherwise noted.