Orbs are special items that appeared in Spyro 2: Ripto's Rage!. Along with talismans, they are energy sources used by residents of [[Avalar] to power their portals. You receive Orbs from doing random sidequests for the people who live in that world, or finding them hidden away somewhere.

Although talismans are the first thing Spyro was told to collect, it turned out that orbs are even more important to the story. The Professor can use the Orbs to seal off Ripto. Not only did they break the seal on the castle door (along with other locks across Avalar), they gave Spyro powerful abilities for a limited period of time. Spyro used this to his advantage when facing Ripto. You will need orbs to unlock Ocean Speedway in Summer Forest, Metro Speedway and Icy Speedway in Autumn Plains and Canyon Speedway in Winter Tundra. You will also need 40 orbs to fight the final boss, Ripto.

In the first version of Spyro the Dragon, after an enemy is defeated, no gem will be given, but a white orb will be given. Twenty (20) orbs will award Spyro an extra life (1UP).

With 64 orbs in all, they are the least abundant of the original collectibles, along with, again, talismans.

An Orb in Skylanders: Spyro's Adventure

An Orb in the Reignited Trilogy 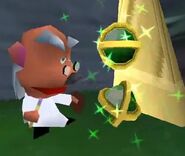 The Professor with two Orbs in Spyro 2: Ripto's Rage

The Professor, Elora and Hunter with two Orbs in the Reignited Trilogy
Add a photo to this gallery

Retrieved from "https://spyro.fandom.com/wiki/Orbs?oldid=118388"
Community content is available under CC-BY-SA unless otherwise noted.