“Psst, Spyro? Want to know a secret? Use the triangle button when you want to zoom in and look 'round.”
—Oswin

Oswin (オージェ=グリヨワーム Ōje in Japanese) is an Artisan dragon who appears in Dark Hollow in Spyro the Dragon. He tells Spyro the secret method of looking around by pressing and holding the triangle button.

In the Spyro Reignited Trilogy, Oswin is a librarian[1]. He wears a turban and jewelry and appears a tiny bit rounder, plus he is more orange than light brown, with purple and golden wings. Upon being released, he yawns. 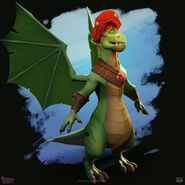 Retrieved from "https://spyro.fandom.com/wiki/Oswin?oldid=123107"
Community content is available under CC-BY-SA unless otherwise noted.