Peace Keepers (コンバットガーデン ホーム Combat Garden Home in Japanese) is the second Homeworld in Spyro the Dragon. The realm is a desert canyon devoid of water. The only moisture is in the tar pits, which will damage Spyro if he steps in them.

The realm has been overrun by Foot Soldiers and Cannon Patrol Gnorcs, who use it as their military camp and target practice area. Their orange and blue circus-like tents are arranged in camps around the realm. Spyro can use the cannon throughout the realm after defeating the Cannon Patrol Gnorcs in the vicinity. With the help of a cannon, Spyro can destroy metal boxes, other enemies, and clear the path towards the Night Flight portal. The Fodder in this world is small brown rabbits. Spyro needs to free ten dragons to access this world.

The Peace Keepers homeworld and realms are quite possibly the harshest worlds to live in. The homeworld itself is a desert with rocky terrain and cliff walls. Tar pits fill the land as well. The only sort of water the Peace Keepers get here are in the form of bubbling underground hot springs, which they use to collect condensation.

Various stone structures are built up from the cracked ground, though most of them are simply archways and lookout towers. The Peace Keepers make a notion to not live in their homeworld, and instead live their militaristic lives in the seclusion of their realms.

Each homeworld has specially designed portals. The portals in Peace Keepers are built like fortress battlements.

The Peace Keepers enforce order throughout the world. They are the strongest of all the Dragon families and know the most about battling their enemies. They live in the desert dunes, tar pits, and ice caves and are always on the lookout for any creatures breaking the peace.[1]

Titan is the leader of the Peace Keepers dragons. He is the first dragon to be freed when Spyro enters the Peace Keepers homeworld. Titan welcomes his arrival and gives Spyro the objective to recover the treasure that was turned into Gnorcs. 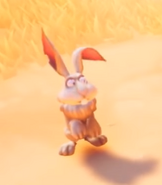 Retrieved from "https://spyro.fandom.com/wiki/Peace_Keepers?oldid=117058"
Community content is available under CC-BY-SA unless otherwise noted.