Poison is an element acquired by Cynder in The Legend of Spyro: Dawn of the Dragon.

The symbol of Poison looks like three bright, sickly green droplets, the largest in the middle, close to the right, the others next to it on opposite sides. If Cynder spits poison at her enemies, they will not die immediately but will die the second time a dragon attacks it. If an enemy is near another enemy when poisoned, the enemy next to it will become poisoned and, like the other one, sure to die the next hit. (Note: The vulnerability does not increase on bosses or Elite Enemies). 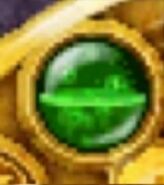 DS symbol
Add a photo to this gallery

Retrieved from "https://spyro.fandom.com/wiki/Poison?oldid=125060"
Community content is available under CC-BY-SA unless otherwise noted.