“The Motion of the Potion!”
—Pop Fizz's official catchphrase

Pop Fizz is widely known as being a little crazy. According to him, the reason he keeps drinking his potion, or soda, is that the effects keeps him on edge, gives him powers, and that it is "soda-licious." He is also one of the few characters who fully understands Double Trouble's language.

Nobody is quite sure who Pop Fizz was before he became an alchemist, least of all Pop Fizz himself. After many years of experimenting with magical potions, his appearance has changed quite significantly. In fact, no one even knows his original color. But it's widely known that he is a little crazy, his experiments are reckless, and the accidents they cause are too numerous to measure. Understandably, he has had a difficult time finding lab partners, or anyone that even wants to be near him. In hopes of making himself more appealing to others, he attempted to create the most effective charm potion ever – but that just turned him into a big, wild, berserker. Or maybe that’s just how he saw the potion working in the first place...

Pop Fizz attended the Annual Storm Titan Games with Drobot and Cali to see their fellow Skylander, Lightning Rod, in action. When Flynn's balloon was struck by Rod's stray hammer, Pop Fizz quickly transformed into his beserker form and knocked away any debris that threatend the audience, while Drobot and Lightning Rod saved the balloon's passengers and both Master Eon and the King of the Storm Giants.

Once everyone was safe, Hugo revealed that the Book of Power has revealed the next fragment to the dreaded Mask of Power. Within the stadium, the Skylanders discovered that the Air segment to the Mask of Power has seemingly taken on the form of a Land Whale, which was stationed at a zoo held by the Cyclops Queen at Tempest Towers. Master Eon sent Pop Fizz, Lightning Rod, Double Trouble, Drobot, Cali, and Flynn to the Tempest Towers that lied beyond the Sea of Storms in their mission to claim the Air fragment before Kaos made his move. However before they could depart, Kaos captured Cali, who knew the path to Tempest Towers. The Skylanders gave chase, following Kaos while treking through the Sea of Storms and battling Windbag Djinnis in the process. They managed to get to Tempest Towers before Kaos could, and tricked their way into the Cyclops city with Pop Fizz's beserker form posing as a never-before-seen creature for the Cyclops Queen, leaving Flynn and Double Trouble outside to keep a lookout for Kaos.

However after tricking the Cyclops Queen and her husband, Pipsqueak, the Skylanders were found out. While Lightning Rod and Drobot were thrown to the Land Whale's tank to be eaten, Pop Fizz was captured and held prisoner in a cage. To escape from his prison, the alchemist became so excited that his potion wore off, allowing Pop Fizz to return to his normal form and slip through the cage bars before releasing Lightning Rod and Drobot from the tank.

After Kaos's battle with the Cyclopses, resulting in Lightning Rod hurling the Land Whale far from Tempest Towers, Pop Fizz concocted a potion made from the animals held by the Cyclops Queen that grew Lightning Rod to a enormous size big enough to carry the tower (that was the true Air segment) back to the Eternal Archive. Once there, Pop Fizz celebrated with his fellow Skylanders of their victory, unaware that there was a traitor in their mist revealing the locations to the Mask of Power to Kaos.

Pop Fizz appeared in Skylanders: Imaginators as one of the Skylander NPC characters (though the player may still play as Pop Fizz using previous figures). In the beginning of the story, he served as the race starter to initiate the race between Spyro and Stealth Elf. When the Skylanders scouted the Academy for possible enemies, Pop Fizz and the other heroes were confronted by Kaos's ultimate Doomlander: the Guacamole Monster.

After the Guacamole Monster was defeated, Pop Fizz alerted everyone that Fizzland was under attack by Kaos and proceeded to escort the Skylander to it. Upon arriving, a projection of Kaos confronted Pop Fizz and demanded to know where to find his Beast Mode potion. Pop Fizz instead consumed a bottle of his own potions and attempted to attack Kaos in his Beserker Form, only to go through the projection, fall to the abyss and later re-spawn. He then introduced the Skylander to the Fizz World Potion switching mechanic. When Kaos was successfully driven away, Pop Fizz downed some of his own potions in celebration.

Pop Fizz was later put under the control of Brain's Mind Magic power, but was later released from it after Spyro and the other Dragons used their Dragon Magic to dispel the brainwashing. Pop Fizz then revealed his plan to invade Kaos's Fortress by building a giant cake the heroes would hide inside and sent the Skylander out to collect cake ingredients.

During and after main story mode, Pop Fizz can be found inside the Sensei Magic Realm, where a Bottle Beast he accidentally created was running rampant.

Pop Fizz possesses the ability to change into a dark blue, beastly berserker whenever he drinks the potion he is holding. He can also throw potions at enemies that contains acid, or can spawn walking purple potions as his helpers. 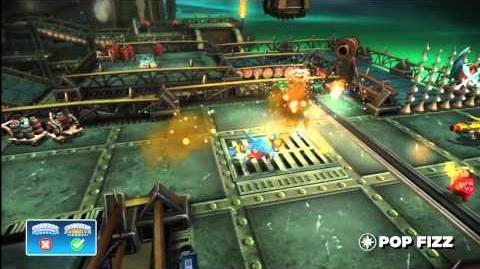 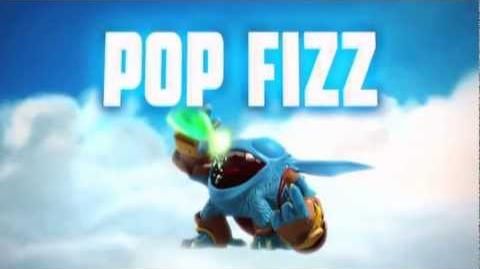 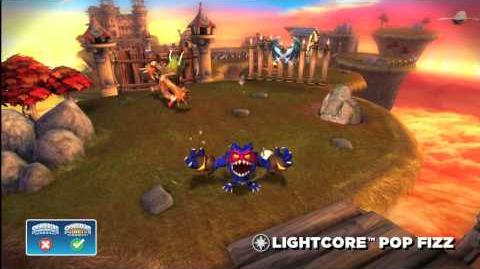 Retrieved from "https://spyro.fandom.com/wiki/Pop_Fizz?oldid=120034"
Community content is available under CC-BY-SA unless otherwise noted.