It is the duty of the Portal Master to decide the fate of Skylands. According to a Story Scroll, neither royal blood nor a sea of gold can make anyone a Portal Master. Either they are lucky enough to be born with the power to wield a Portal or they are not. The number of Portal Masters rises and falls over the years, leading some to believe that Portal Masters will simply appear when they're needed the most. The bonds between the Skylanders and their Portal Masters are unbreakable.

Portal Masters are highly revered, as evident in some of the inhabitants, including Hugo and Fargus, calling the new Portal Master "Great One."

However, while there are good Portal Masters, there are also evil ones. With the help of The Darkness, Dark Portal Masters use their evil magic to spread darkness and havoc across Skylands, even summoning the most sinister of creatures to carry out their plans.

Portal Masters have great control over Portals of Power, allowing them to teleport other beings and objects, as well as using them to view events or far-away areas. They can also teleport themselves at the risk of being electrocuted. Portal Masters are born with powerful magic, as Kaos was able to bring the Wilikins to life with his magic at a very young age; a sign that he was indeed a Portal Master. Portal Masters can even use time spells, which they can use to alter the age of people or objects, as Master Eon used this spell to age a block of ice until it melted, and in Trap Team, Kaos was used by Wolfgang to travel 10,000 years into the future; this applies even to Earth Portal Masters such as Bruno.

In Skylanders: Ring of Heroes, it is mentioned that the Portal Masters' magical abilities bring the Skylanders' powers to their full potential, making the wizards an essential tool for the group even without active Portals. Portal Masters also have the ability to concentrate their power into elemental Cubes, making magic reserves for future generations of sorcerers. Some Portal Masters also develop special magic of their own, though their abilities are mostly passive.

The Portal Masters are the wisest and most powerful beings who have been protecting Skylands from The Darkness for centuries. There was a time, however, where it was summoned from the depths of a Spell Punk fortress, and the Portal Masters and their Skylanders almost lost the battle until the Core of Light, created by the Ancients, was rediscovered. Despite its defeat, the Darkness bestowed its power upon certain people with aptitude for Portal magic and corrupted them with dark thoughts, turning them into Dark Portal Masters.

Years later, Master Eon, the last of the good Portal Masters, and his Skylanders protected the Core of Light that kept The Darkness at bay, but Eon grew weaker with age. 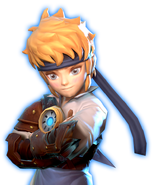 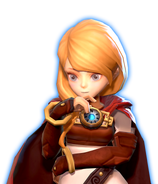 Eugenie's Earth Portal Master portrait in Skylanders: Ring of Heroes
Add a photo to this gallery

Retrieved from "https://spyro.fandom.com/wiki/Portal_Masters?oldid=123007"
Community content is available under CC-BY-SA unless otherwise noted.