Princess Ami is a fairy princess in Charmed Ridge who had been sought by Prince Azrael of Felinia, and the leader of the Cat Wizards, leading to a war. However, both Azrael and Ami were secretly and truly in love.

When Spyro, with the help of several fairies, got through the last gate inside Charmed Ridge's Royal Castle and reached to an area with an exit portal where Prince Azrael and Princess Ami were, Ami explained everything to Spyro and gave him a dragon egg so that he wouldn't tell anyone where they went. The couple then drove off on a motorbike into the sunset.

Later, Ami briefly visited Evening Lake in order to assist in the construction of the rocket to take Spyro to Midnight Mountain. She also took Zoe to Starfish Reef and informed her of the hidden egg.

According to the epilogue of the original game, Princess Ami and Zoe competed against one another for the affections of Sparx the Dragonfly. 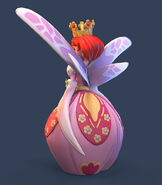 Retrieved from "https://spyro.fandom.com/wiki/Princess_Ami?oldid=115092"
Community content is available under CC-BY-SA unless otherwise noted.