Rams are enemies that are appeared in Spyro the Dragon and Spyro 2: Ripto's Rage!

In the former, yellow rams can be found at Stone Hill, while in the latter, brown variants can be found at the Cloud Temples who break out of stone-statue forms when first approached. Reignited rams' designs in Cloud Temples have a Disney style appearance. They will charge at anyone who enters their vision. They can be defeated either flaming or charging. They are not to be confused with Goats.

Like goats, Rams tend to charge at their enemies; should Spyro get too close to a Ram encased in stone, they will come to life and charge at him. Rams will attack those who have attacked them, as seen when one ram chased a wizard who continued to cast a Stone spell on it. They are overprotective of their territory and will fight to keep it safe. Despite their aggressive natures, they tend to fall in love with other, as shown in the ending cutscene of Cloud Temples, in which one of the Warlocks was transformed into a ram and then chased by another ram.

In Ripto's Rage!, a Wizard and a Warlock were casting magic on a ram. The wizard wanted the ram to be a stone statue, while the Warlock continued casting a spell to free the ram. After a brief fight over the Ram, the Warlock cast an unknown spell to take away the wizard's staff. He then cast another spell on the ram, freeing it. The Warlock then laughed jeeringly as the ram chased the wizard away in anger that he continued to turn it into stone.

After Spyro and Sparx helped the Wizards get their staffs back, one of them confronted the Warlock, who took away his staff. The wizard then turned the Warlock into a purple ram while laughing. While under the confusion of being a ram, another ram arrived and fell in love with him, presumably mistaking the Warlock as a female. The ram, who had a red heart above its head to show it was in love, then looked at the camera and bobbed its eyebrows. Seeing this, the Warlock gave out a "baa" of fright and ran away, knowing that the ram was in love with him. The other ram then chased after him. 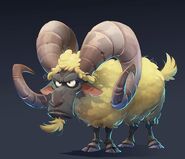 A grey variant in Canyon Speedway.

A Ram in the Spyro Reignited Trilogy version of Cloud Temples

Add a photo to this gallery
Retrieved from "https://spyro.fandom.com/wiki/Rams?oldid=122609"
Community content is available under CC-BY-SA unless otherwise noted.