“Advice? Hm... A wise dragon once told me 'Aim high in life, but watch out for flying boxes.'”
—Revilo

Revilo (レギワ=ドリノマール Regiwa in Japanese) is a Dream Weavers dragon who first appeared in Spyro the Dragon. He can be found in Jacques. Just before the boss, he is waiting to be released.

In the Spyro Reignited Trilogy, Revilo is a knitter who is actually knitting his own body.[1] He appears elderly, covered all over in green yarn from neck to tail, he's holding a pair of knitting needles, has large glasses that are attached to his horns which are holding a ball of yarn, has two scarves, his wings look like knitting needles with woven yarn and mittens, and he now rocks back and forth on his tail like a rocking chair.

Revilo and his friend Lateef in Dark Hollow.

Revilo in Stone Hill.
Add a photo to this gallery 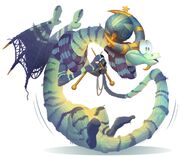 Retrieved from "https://spyro.fandom.com/wiki/Revilo?oldid=113672"
Community content is available under CC-BY-SA unless otherwise noted.