In the original trilogy, the farmers share the same model, a polygonal body with paint that resemble a red shirt, denim jeans, brown boots and a straw hat. The head had a uncomfortable design with a air filter that reseble a mouth and square eyes with a blue pupils.

In the Spyro Reignited Trilogy, the four farmers are redesigned with different clothing, voices and postures. Greenbeene had the same color like the original game, Applebee had a green shirt (like crabapples), blue suspenders, blue jeans and brown shoes, John wearing a brilliant pink and salmon uniform with enormous red shoes and Barleycorn wearing a orange shirt, denim jeans ans red converse. They all had a more stylized design and are chewing a straw. 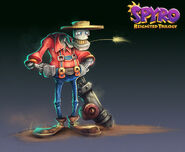 Concept art of one robot farmer by Rob Duenas

Spyro Reignited Trilogyconcept art of the heads by Rob Duenas

Robot Farmer attire concepts by Rob Duenas. At one point in development, the robots were planned to wear normal clothing and farmer's boots (or neither).

Retrieved from "https://spyro.fandom.com/wiki/Robot_Farmers?oldid=124136"
Community content is available under CC-BY-SA unless otherwise noted.