Roman City is a realm in the Spring Fairy Home from Spyro: Season of Ice. It has an Ancient Rome theme, with yellow, blue, and white architecture, gold and maroon carpets, Doric columns, and topiaries, surrounded by sparkling blue water. There are lion characters similar to the ones from Sunny Villa native here. During Spyro's visit, their main predicaments center around a parade they are planning and how the rhynocs have been messing it up. There is also a blue thief that is difficult to catch due to the narrow walkways surrounded by water. 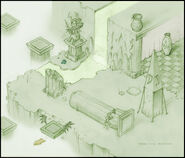 Map of the level
Add a photo to this gallery

Retrieved from "https://spyro.fandom.com/wiki/Roman_City?oldid=121569"
Community content is available under CC-BY-SA unless otherwise noted.