watch 02:45
Wiki Targeted (Games)
Do you like this video?
Play Sound

Scorch is a boss found in Scorch's Pit, a boss realm in Spyro: Year of the Dragon, fought on the way to Midnight Mountain. He is a transformed Rhynoc, who was "created" by the Sorceress in order to stop Spyro in his tracks.

In the Reignited Trilogy, Scorch has a more bat-like appearance.

When the Sorceress got fed up with Spyro's bravery and selfless meddling, she decided to create "a monster to end all monsters". Bianca was horrified to realize that the only reason why the Dragon Eggs were brought to the Forgotten Realms was so that the Sorceress could kill the baby dragons to get their wings for a spell to become immortal. Furious, Bianca abandoned her mistress and headed off to save a captured Hunter.

The Sorceress then decided to turn one of her Rhynocs into a murderous monster in order to kill Spyro. Two Rhynocs were nearby, keeping an eye out on the captured Agent 9, and one of them pushed his cowardly comrade, Scorch, towards his mistress. Scorch was, offscreen, turned into a horrific demon-like monster by the Sorceress, and was sent to a pit inside the giant skeleton of a dead creature to execute Spyro and Bentley. Working together, the dragon and the yeti defeated the monster and sent him tumbling into a pool of acid, killing him.

Scorch, prior to his transformation

Scorch with Sgt. Byrd
Add a photo to this gallery 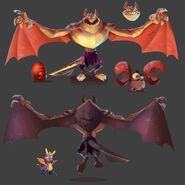 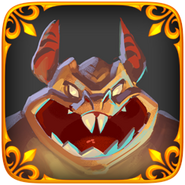 Scorch as he appears in Spyro Reignited Trilogy

Add a photo to this gallery
Retrieved from "https://spyro.fandom.com/wiki/Scorch_(boss)?oldid=123955"
Community content is available under CC-BY-SA unless otherwise noted.