Scratch and Sniff are Skabb's pet, parrot-like birds (or possibly reptavians due to their dragon wings and lizard tails), who appeared only in The Legend of Spyro: The Eternal Night. Due to Skabb's stupidity, both Scratch and Sniff are the real captains of the Fellmuth, and they seem to be in charge of the Pirate fleet. They command Skabb by telling him what to do.

It is unknown what their species are, but they seem to be an amalgam of several animals: the size and beak of a parakeet, the body, eyes, and feet of an owl, the wings of a bat or dragon, and the ringed-tail of a lizard with a webbed end. Both Scratch and Sniff are opposites despite their positions, especially in color. They both wear pirate skull cap with two golden feathers attached, eye patches, and stitches on their bellies. Both the eyepatches and stitches are positioned in opposite angles.

Scratch is orange, has his eye patch over his left eye, and his stitch on his belly slopes upright.

Sniff is fandango purple, has his eye patch over his right eye, and the stitch on his belly slopes downright.

Although not the main antagonists, both Scratch and Sniff are one of the major villains in The Eternal Night. They even represent the duality of different villains; one's a schemer who uses his charisma and coldly calculates many plans but is also an arrogant coward, and another that is erratic, brutal and acts on reckless impulse, not willing to give up everything achieved and picking a fight if so.

As a schemer, Scratch is calm, cold, calculating, and cruel, plotting juicy ideas for his crew and the fate for his prisoners and enemies. While he seems to be charismatic, he is mostly arrogant. But like all crooks, he is very cowardly, not willing to pick a fight with his enemies unlike Sniff. When Sniff is knocked out by Sparx, Scratch flies away. He has a haughty British accent, and seems to be the leader as he is really the one who does most of the commands, decides the fate for his prisoners, and seems to do it all with a flair, along with a dramatic and conceited flourish and bow.

Sniff has an African-American gangster accent, and seems to be the second-in-command. He gives out some orders, but they are mostly rushed and short, unlike Scratch's monologue-like commands. Despite being Scratch's co-captain, Sniff is definitely the opposite of him. He is brash, erratic, brutal, rude, and lacks self-control. He is not a schemer, so he simply acts purely on impulse and is prone to reckless behavior, wanting to pick a fight with his opponents, even when Skabb is defeated. This recklessness leads him to his defeat when he is knocked out by Sparx, who couldn't take anymore of Sniff's insults and taunts.

It is shown that both Scratch and Sniff have the ability to lift and carry heavy characters, such as Skabb, across great distances.

Both Scratch and Sniff controlled the Pirate Fleet that travelled across the realms in massive ships, capturing inhabitants to force them to fight in a gladitorial arena on the Fellmuth for entertainment, and raiding various locations to steal precious and valuable treasures. During the events of The Eternal Night, Skabb sent the Skavengers to find prized fighters in the Ancient Grove for the tournament. They were also in search of Arborick, the tree sentinel who lived in the Grove, and planned on using him as their star attraction to their tournament. However, Spyro accidentally killed Arborick while on his search for the Chronicler, and Scratch and Sniff arrived and decided to capture Spyro as a replacement.

Scratch and Sniff forced Spyro to fight in a gladitorial arena on the gigantic ship, Fellmuth, but the purple dragon defeated everything they threw at him. Spyro soon discovered, to his shock, that Cynder was captured as well, sometime after she fled the temple. Under Scratch's orders, Skabb commanded the two dragons to fight, but Cynder only wanted to put up a show long enough for the crowd so that they could figure out on how to escape. Suddenly, Gaul's army attacked, capturing Cynder, and attacking the Pirate Fleet. During the chaos, Spyro reached the captain's quarters to find a map that would show him the way to the White Isle, but he encountered Skabb, Scratch, and Sniff, who sought revenge for the trouble Spyro supposedly brought to Fellmuth.

Spyro fought Skabb, but the pirate ran away with the help of Scratch and Sniff, who decided that they had had enough of Spyro's "meddling", leading Spyro to chase after them through the Pirate Fleet. After reaching Skabb on a large crow's nest of a ship, the purple dragon fought the pirate again and defeated him a final time, sending him stumbling off the crow's nest and falling to his death. However, Sniff refused to accept defeat and began to threaten Spyro before an annoyed Sparx knocked him out cold, finally getting revenge on the parrot who taunted him. Scratch, the other parrot, escaped without a word. 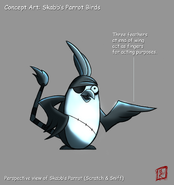 In the DS version of The Eternal Night, Scratch announces to his 'Ape' audience of Spyro's next opponent.

Spyro being held before Scratch by two Scavengers in the DS version of The Eternal Night.
Add a photo to this gallery

Retrieved from "https://spyro.fandom.com/wiki/Scratch_and_Sniff?oldid=120004"
Community content is available under CC-BY-SA unless otherwise noted.