Spyro 2: Ripto's Rage!
Spyro Reignited Trilogy
Shady Oasis (オアシスドーム; Oasis Dome) is another Middle Eastern Realm in Autumn Plains. The residential Hippos are trying to reach the Magic Berry Bush, but are too short and not strong enough. Once they eat the berries, they become much larger temporarily and can bash through caged doors. Spyro must help a hippo named Shorty get to the Great Berry Bush, where they can eat the berries 'all the time' while fighting Arabian-style Thieves and their genie allies. The Talisman for Shady Oasis is the Mystic Lamp.

The scene opens showing a young hippo who is trying to reach one of the magic berries from the bush. Suddenly, a thief runs by carrying a handful of magic berries while doing his signature laugh. The hippo chases after the thief, but the thief is much faster than the hippo. The berry at the top that the thief was carrying falls off and the hippo eats it, while still chasing the thief. Suddenly, the hippo grows bigger and faster, and nearly catches the thief, but the thief goes through a hole in a wall, which is too big for the hippo to go through. He continues running around, laughing at the hippo. The camera goes back to the hippo who is wedged in the wall, and looks at the camera, sadly.

The scene opens showing two hippos who are at the Great Berry Bush, but all of the berries are missing. They wonder what has happened to them. They then hear a sound behind the bush, and look to see a greedy hippo in his enlarged form, eating almost all of the berries. The two hippos frown at the hippo, upset. The enlarged hippo, embarrassed, pushes some of the uneaten berries to another hippo who is beside him. The scene does not show the two hippo's angry stares in the Reignited Trilogy version.

For the Grundy side quest, see the video on the Winter Tundra page

A Hippo
Add a photo to this gallery 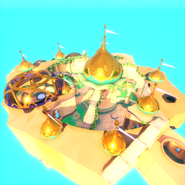 Retrieved from "https://spyro.fandom.com/wiki/Shady_Oasis?oldid=119854"
Community content is available under CC-BY-SA unless otherwise noted.