“No sheep were harmed in the making of this game. A few Gnorcs, but no sheep.”
—Spyro the Dragon credits

Sheep are the one of the most popular and famous of the fodder animals as they have appeared throughout the Spyro series, and is also the subject of the TV advert for the first Spyro game. They later made a reappearance in Skylanders series.

The sheep are the local animals in the realms of the Dragon Kingdom, Avalar, and the Forgotten Realms. They are also enemies in the form of Sheep UFOs.

One evil sheep in Spyro the Dragon, Toasty, serves as the boss of the Artisans realm, having allied with Gnasty Gnorc.

Sheep reprise their roles as fodder in the remastered original three games of the Spyro Reignited Trilogy.

In the spin-off game of Skylanders, the sheep are one of the indigenous fauna of Skylands. Most of the sheep population graze in the Perilous Pastures but they tag along to the Ruins in one of the cutscenes.

According to a note from Hugo, the sheep are among "the most feared creatures in Skylands" and that many Mabu "find their belongings missing after falling asleep while counting sheep." Another scroll mentions that Mabu use small tornados to get rid of sheep. However, it is most likely a propaganda by Hugo himself, as he greatly despises sheep.

Sheep were unwilling victims of some invisible trolls who caused mischief in the Mabu Market, making the Skylanders believe that the sheep were flying by themselves, when in truth, they were really being carried by the trolls.

Drill Sergeant was sent to the Giggling Forest to deal with two mega-sized Sheep terrorizing the trees there. Before he can land a hit on the sheep, Kaos, who had claimed to be turning over a new leaf by battling evildoers, arrived and saved the forest by making the sheep "vanish."

Despite harmlessly grazing the Ruins, the sheep play a small role as an obstacle. When Arbo needs to gather apples for special seeds, the sheep will try and eat the apples. The Skylander will then have to gather the apples before the sheep eats them, in order for Arbo to be able to find the location of the Eternal Life Source.

In the 3DS version of Spyro's Adventure, sheep are the local animals in the Radiant Isles. In Daystar Temple, whenever you break the sacred Sheep statues, your Skylander will temporarily turn into a Sheep. After a while they change back. By using different attacks, the sheep will do different things. For example, if Gill Grunt sprays them with water, their wool will become soaked and stick to their skin.

An evil sheep named Sheep Creep is one of the many trappable villains that escaped Cloudcracker Prison. He was originally imprisoned for leading an ill-fated sheep rebellion.

A sheep in Spyro the Dragon

A sheep in Spyro: Year of the Dragon

A sheep in Spyro: Season of Ice 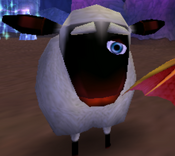 A sheep in Spyro: Enter the Dragonfly 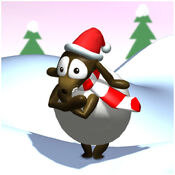 Concept art of a sheep in Spyro: Attack of the Rhynocs 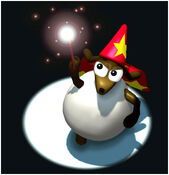 Concept art from Spyro: Attack of the Rhynocs of a sheep doing magic

A Sheep in Spyro: A Hero's Tail

A Black Sheep variant in Spyro: A Hero's Tail

A sheep in Spyro: Shadow Legacy 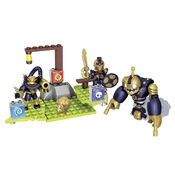 Retrieved from "https://spyro.fandom.com/wiki/Sheep?oldid=116511"
Community content is available under CC-BY-SA unless otherwise noted.