Spyro Wiki
Register
Don't have an account?
Sign In
Advertisement
in: Spyro: Year of the Dragon, Spyro 2: Season of Flame, Spyro: Attack of the Rhynocs,
and 5 more
English

“I love the smell of singed Rhynoc in the morning!”
—Sheila

Sheila was originally a male kangaroo with horns, hair and wore an orange shirt and red boxing gloves. Her designer, Oliver Wade, wasn't certain about the design and didn't know that she was going to be named Sheila. "I honestly don't remember what I was thinking with the horns and the hair that you can vaguely see. I also didn't know her name was going to be Sheila, so she looks a little more like a male kangaroo. Maybe that's why the hair is there...I may have tried to make her female looking at one point."[2] 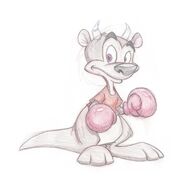 In Sheila's original form, she looks like a plain kangaroo with brown fur and green eyes.

Her redesign in the Spyro Reignited Trilogy shows her with lighter fur color and red hair in pig-tails. Her waist is thin, and she also wears a khaki safari shirt with a belt and backpack. Her pupils are also much bigger.

Sheila is generally an easygoing character. She speaks with a smooth Australian accent and enjoys the 'simple pleasures of yesteryear.' She is friendly to those she cares about but doesn't take any prisoners when it comes to kicking Rhynoc butt. Sheila is more than happy to help Spyro on his journey, and gives him a hand when he is fighting in Buzz's Dungeon.

Sheila's gameplay focuses on her jumping ability—she can jump like Spyro but can perform a double jump in the air. Furthermore, if Sheila jumps when she hits the ground, she will perform a super jump. Sheila attacks with a kick and can also do a stomp move in the air, similar to Spyro's headbash move. This attack helped her defeat Buzz alongside Spyro. Her kick attacks are strong enough to shatter big rocks and certain metal objects, such as vases and chests requiring an attack from above.

Sheila's native realm is a mountain alp known as Sheila's Alp, a cool, peaceful place inhabited by several goats. She took responsibility for teaching her goat neighbors certain tricks to survival and does her best to protect them from harm - and each other's tricks.

Around the time of Year of the Dragon, Sheila's Alp was overrun by Rhynocs. Sheila was perceived as a threat to the Sorceress' plans, and so her capture was ordered. The Rhynocs succeeded in kidnapping Sheila and imprisoned her in a cage in Sunrise Spring, to be guarded by Moneybags (who was easily persuaded by bribes). Moneybags' greed ended up hurting the Sorceress' schemes, however, when Spyro agreed to pay him several gems in exchange for Sheila's release. When freed, Sheila kicked Moneybags hard into a stone wall as payment for keeping her imprisoned. Before returning home, Sheila explained to Spyro that's been over a thousand years since the Dragons vanished from her worlds, and all the magic vanished with them. Afterward, she had been loyal to Spyro ever since he freed her.

Shiela later heard that the Sorceress was planning to ambush Spyro on his way to Midday Gardens with a monster named Buzz. The kangaroo hurried over to Buzz's Dungeon to help him out. While Spyro and Buzz mainly charged at each other, Buzz was knocked into the lava pit. Sheila would then stomp the monster with her feet to force him to sink. After a while, Sheila was able to finish Buzz off with a mighty stomp, which caused his demise.

After the Sorceress's first defeat, Sheila was back in her realm scolding two Mountain Goats for teasing a Moose, which resulted in one of them, named Billy, getting his head stuck in a mountain wall. Spyro arrived and asked Sheila if she had seen Hunter as he had been looking for the cheetah all day. The kangaroo told him that Hunter made her promise not to tell him where he and another person went, partly exposing the secret by accident. When Spyro was shocked by the news, Sheila said that he did not hear anything from her.

Sheila reappeared in this game, playing in certain levels in the Dragon Realms.

Sheila met up with Spyro again in Kangaroo Hoodoos, where the Rhynocs have stolen the land's artifacts. She tasked Spyro in finding and returning them to the museum. Once done, Sheila gave Spyro Kangaroo Hoodoos' Heart of the Lands.