All known to be Male

Shepherds[1] are enemies that appeared in Spyro the Dragon and Spyro: A Hero's Tail. They are mostly seen protecting their flock of sheep, and won't hesitate to whack Spyro with their staffs. They work with usually two kinds of animals: dogs and sheep. In the former, they can be found in Stone Hill and Toasty, while in the latter, they can only be found in Dragonfly Falls. In Stone Hill, Shepherds are found guarding flocks of sheep while the rams charge at Spyro. In the boss level, Toasty, they work with herding dogs to keep Spyro away from Toasty himself.

Shepherds are considered to have ninja-like abilities and can easily hit Spyro with their staffs if he comes too close. It is easy to beat them with a flame from right outside the range of their staff, or simply to rush in with a well-aimed charge before they have a chance to attack. In Stone Hill, the Shepherds are guarded by rams, and in Toasty, they are often guarded by Dogs, the latter of which requires extra caution. They also wear a similar outfit to Toasty.

In A Hero's Tail, they are shown to be in charge of the goats, who also made a cameo.

The Shepherd's attack can reach quite far but can still be easily avoided. It is usually best to just flame them before they can attack but charging in works just as well. 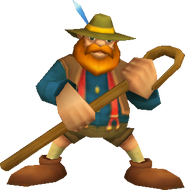 A shepherd as depicted in Spyro: A Hero's Tail.
Add a photo to this gallery

Retrieved from "https://spyro.fandom.com/wiki/Shepherds?oldid=111368"
Community content is available under CC-BY-SA unless otherwise noted.