Skabb is the apparent captain of the Skavengers that captured Spyro, who is in fact controlled by the two parrots, Scratch and Sniff, who are normally found perched on Skabb's shoulders. He is also responsible for the capture of Hunter, Cynder and Mole-Yair, as well as other various inhabitants. He is one of the bosses in The Legend of Spyro: The Eternal Night.

Skabb is very large, very strong, and above all, very stupid. His tongue hangs out from his mouth and he has a large scar over his face. He has a large treasure chest strapped to his back, where Sniff mans a small cannon inside. He has only one arm, the other one is a hook that is attached to an elastic rope so that he can use it to hit people. He also has a mini cannon gun for one leg.

Skabb wields a huge cutlass called the Hoo~Doo Blade, a sword that has a cursed blade embued with ghostly energies that can release a deadly shockwave attack.

Since Skabb is stupid, the only things he can say are short, incomprehensible grumbles. He has two parrots, Scratch and Sniff, who speak for him. Scratch is intelligent and sarcastic, and he does the casual talking for Skabb, sitting on Skabb's left shoulder. The other one, Sniff, sits beside a chest that holds a small canon. He looks very much like Scratch, only he is purple, and has an eye patch on the opposite eye. He shouts insults and backtalks. He often calls people "foo's". After Spyro defeats Skabb, Scratch flies away, and Sniff gets knocked out cold by Sparx, who couldn't take any more of his insults. Scratch and Sniff are the actual captains of the Fellmuth, which possibly makes Skabb their first mate.

Strangely, he speaks perfect English in the GBA version of the game.

After escaping from Fellmuth Arena, Spyro fought Skabb on two separate occasions during his escape from the Pirate Fleet. Skabb was ultimately killed by Spyro, backing up onto the plank in a wild show of pain before he plummets to the ocean below. The fate of his parrots and his fleet were unknown.

Skabb has various attacks. When Spyro first battles this stupid foe, Skabb chases the purple dragon around the room. If Spyro gets to close to the pirate captain, Skabb will perform a bunch of sloppy slashes. Sometimes, he will bite or swipe his hook at Spyro. After Skabb is tired of chasing Spyro, he will shoot his elastic hook in the purple dragon's area, only to get it caught on something in his chambers. After these failed attempts, Skabb resorts to his mini cannon, shooting non-stop at Spyro. He will then release ten small cannonballs at Spyro in a series of careful, aimed shots. After being defeated, Scratch and Sniff somehow pick up the enormous pirate and fly him away.

In the second fight, Skabb is more careful with his attacks, choosing to stand at the side lines and fire the mini cannon strapped to his shoulders. If this fails, he rallies a group of four small pirates that attack Spyro. After the small battle with the mini pirates, Skabb raises his sword and lightning strikes the blade, temporarily empowering him and his blade with ghostly energies. He then comes at Spyro and swing his sword (three attacks will kill). If this fails, his leaps up and stabs down into the center, releasing several shockwaves of pink electricity. The shockwaves swell from three waves to seven waves per swell. The amount of energy leaves him slightly weakened, thus gives Spyro an opportunity to attack. After recovering, Skabb's SkurvyWing minions drop bombs all around him. When this fails, he rallies four medium sized pirates. This process repeats itself until Spyro finishes the pirate off. 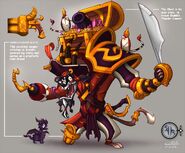 Skabb as seen in his in-game model 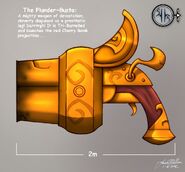 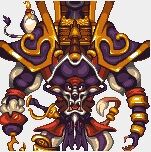 Retrieved from "https://spyro.fandom.com/wiki/Skabb?oldid=119046"
Community content is available under CC-BY-SA unless otherwise noted.