Skavengers, also known as Pirates, are canine-like villains in The Legend of Spyro: The Eternal Night. They travel across the realms in massive ships, capturing inhabitants to force them to fight in a gladitorial arena on the Fellmuth for entertainment, and raiding various locations to steal precious and valuable treasures. Hunter, Spyro, Cynder, Sparx, and Mole-Yair are examples of the Skavengers' prisoners.

The captain of the Skavangers is Skabb, but he was too stupid to talk for himself, so the real leaders of the Skavengers are two parrots named Scratch and Sniff.

The Skavengers were searching for the wooden sentinel, Arborick, in the Ancient Grove in order to use him as their star attraction for their tournament. When Spyro and Sparx killed Arborick, they captured them as a replacement. They forced Spyro to fight in a gladitorial arena on the gigantic ship, Fellmuth, against the Blundertails, the Ravage Rider, and the Executioner. Spyro also discovered, to his shock, that Cynder was captured as well, sometime after she fled the temple. Skabb ordered them to fight, but Cynder only wanted to put up a show long enough for the crowd so that they could figure out how to escape.

Suddenly, an attack by Gaul's ape army interrupted the fight so that they could capture Spyro in order to free the Dark Master, but they decided to capture Cynder instead to use her as bait. Spyro then fought through the Skavengers to find a map that would lead him to the White Isle, where the Chronicler dwelled. When he reached the captain's quarters, he was confronted by Skabb and fought him, but the pirate ran away. Spyro glided through the fleet of small ships, and reached Skabb on a large crow's nest of a ship, where he fought him again and defeated him a final time. Sparx knocked out Sniff, one of the parrots who were taunting him while Scratch, the other parrot, managed to escape. The later fate of the Skavengers is unknown.

Skavengers come in three different sizes: small, medium, and large. Their sizes are based on their rank: small pirates are Soldiers, medium pirates are Captains, and large pirates are Commanders.

There are others that are not very common but just as dangerous. The Blundertails faced in the arena as bosses become minor enemies on the Fellmuth and, on a few of the fleet's vessels, the gunners that fire cannonballs at Spyro and there are also Scurvywing Riders, which will be re-encountered in another boss-fight on one of the ships and those that act as bombardiers when Spyro is escaping the pirate fleet and pursuing Captain Skabb.

Their fleet consists of flying ships.

The Skavenger soldiers do not wield any weapons, but they attack by scratching, punching, and leaping into Spyro much like the Apes do. Although they have two swords strapped to their lower backs, they chose not to use them. These type of Skavengers are strong in very large numbers or when powered by totems thrown by the Pirate Commanders.

The Skavenger Leaders wield sabers and throw dynamite balls. Their sword attacks consist of downward slashs, X pattern like hacks, and an upward slices. Medium pirates sometime strafe off to the side when Spyro approaches or they attack him head on. They throw their bombs at Spyro, trying to take careful aim to not miss their mark. Luckily, they are sort of stupid and most of the time they miss, or hurl it at their own comrades.

The Skavenger Commanders are the strongest type of Pirate. They wield a flaming cutlass and they throw totems, which empower the lesser pirates to make them stronger and harder to kill. Their sword attacks consist of C like slashs, circular swings, or they barrel right towards Spyro much like the Ape Commanders do.

The Pirate Cannons are seemingly common. They mount on fire cannons, and fire at you with barrage of cannons. They fire at Spyro no matter where he goes much like the Ape Assault Turrets do.

The Blundertails are not as common as the first three Skavengers, but are just as dangerous. The scorpion-riding pirates are first faced in the Fellmuth arena as bosses, but they are later on faced as enemies. They have two methods of fighting: in long-range attacks, they fire cannons from their tails, and in short-ranged, they swat you with their pinchers.

The Skurvywing Riders are not the most common to face, but are seen throughout among the fleet, riding astride their mammavian mounts, the Skurvywings. When facing them, the riders hurl fire bombs at you. To avoid you, they fly out of sight until it is safe for them to attack once again. When they are not attacking you face-to-face, they will drop bombs on you as they fly by. Fortunately, they can't exactly hit you on target, so fly pass them if you can.

There are other enemies found amongst the Skavengers. One are the ghosts found in the prison cells of the Fellmuth, and below the decks of the fleet ships. Another are armored saber-toothed big cats that are like the Apes' Death Hounds; these though are found in the DS version of The Legend of Spyro: The Eternal Night.

Unknown if they are the deceased spirits of the Skavengers, these pirate ghosts are still dangerous. They appear from out of nowhere and will slash you with their cutlasses. They are found in the Fellmuth's brig and some of the fleet ships below deck. Howewer, they are extremely weak against fire!

The ghosts seem to be pirate versions of Wraiths, the second form of the Ogres when their armor is shed.

Appearing only in The Eternal Night DS version, not much is known about these felines except they wear the same armor as the Skavengers. They are the pirate versions of the Death Hounds.

Two parrots named Scratch and Sniff are the pets of Skabb. However, Skabb is too stupid to talk for himself so the parrots do the talking for him and command the pirates. 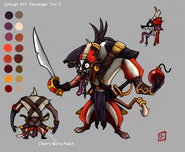 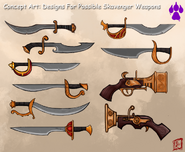 Weaponry used by the Skavengers

The Skavengers having captured Spyro and Sparx

Retrieved from "https://spyro.fandom.com/wiki/Skavengers?oldid=122717"
Community content is available under CC-BY-SA unless otherwise noted.