At one point, Kaos banished many of the Skylanders to Earth, while others arrived by different means. Far away from the magic of Skylands, they shrunk and turned into immobile figures, requiring a Portal of Power in order to return to Skylands and come back to life.

Recruited by Portal Masters or graduated from Skylanders Academy, a new Skylander's image is engraved onto The Book of Skylanders and is bound to it.

Each Skylander has their own unique personality. They are freedom fighters in spirit, living for action and their love for battle. United by their unique abilties and loyalty to their leader, Master Eon, as well to each other, family, and friends, the Skylanders all share the purpose and destiny to protecting Skylands from all things evil.[1]

It was said that the Giants were the original Skylanders, and the first to exist. The Giants battled against the tyrannical Arkeyans for the freedom of Skylands. In a final battle against the Arkeyans, the Giants were shot to Earth as a form of sacrifice, where they’ve been buried underground ever since. As the years passed, the enormous Skylanders were soon considered as a myth.

Time went on, and many brave Skylanders helped protect Skylands from all things evil, and protecting the Core of Light from the forces of darkness. Despite the fact that the Skylanders come from different realms and worlds, each know that it is their destiny to use their abilities to protect Skylands.

Shortly after the Core's destruction, all of the Skylanders were banished from Skylands to Earth, where they were turned into toys as a result of Earth bearing no magic, and waited for a new Portal Master to find them. Although Master Eon survived the destruction of the Core of Light, he became a spirit and was unable to fight Kaos and The Darkness, leaving the duty of leading the Skylanders to the new, young Portal Master. After Master Eon recruited the new Portal Master, the Skylanders made their suprising return to Skylands, arriving on the Shattered Island to save its Mabu inhabitants from a freak tornado that was ravaging their village. The heroes then began their quest to save Skylands from Kaos' tyranny with the new Portal Master guiding them.

After Kaos's defeat in his lair, three of the Skylanders (Spyro, Gill Grunt, and Trigger Happy) returned to the Ruins with the captive Kaos, and Hugo later banished the evil Portal Master to Earth where he was shrunk and turned into a toy. However, Master Eon hinted to the new Portal Master that the journey with their Skylanders was only the beginning.

In Skylanders Academy's canon, the Skylanders were founded entirely by Master Eon, who opened the Skylanders Academy after the terrible events of the Great War and the growing threats of powerful villains. In this continuity, the first few Skylanders are characters from several different groups of the game's story, including Ka-Boom, Snap Shot, Jet-Vac and Pop Fizz; even after decades they continue to protect the realm through heroic deeds and important jobs as professors or prison wardens. Over the years, many cadets have taken their courses, and those who are prepared enough to suceed in the Skylander Games are honored with their position on the Skylanders team, bound forever to The Book of Skylanders.

The current core team of the Skylanders is known as Team Spyro, being the primary group to answer to missions in nearby regions, both to defend others from evil acts, or offer a variety of services. The group is formed by newly graduated Skylanders, Spyro, Stealth Elf and Eruptor, and by veterans Jet-Vac and Pop Fizz.

As of Season 2, age has started catching up to many of the veteran Skylanders, many who have already retired or do so during the show's events.

There are many Skylanders who have caught Master Eon's attention and joined the cause to battle the dark forces who threaten the world of Skylands. The famous purple dragon himself even joined the ranks, becoming leader of the modern-day Skylanders. 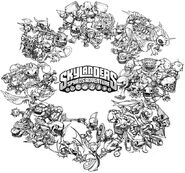