Slam Bam (スラムバム in Japanese) is a blue, four-armed yeti who is one of the playable Skylanders in the Skylanders series, first appearing in Skylanders: Spyro's Adventure.

Slam Bam can be a little frosty with folks he doesn't know, but soon thaws over time. Get on his bad side, however, and the polar pugilist will knock you out cold.[1]

Slam Bam lived alone on a floating glacier in a remote region of Skylands, where he spent his time ice surfing, eating snow cones, and his only friends were his many beautiful ice sculptures. It was a peaceful life, until Kaos destroyed the glacier, stranding Slam Bam on an iceberg that drifted through the skies for days. He awoke on Eon’s Island, where he was taken in and trained to become a Skylander. Now his ice sculptures serve as a frosty prison for any evil-doer that gets in his way, and provide a key ingredient for delicious snow cones.

This four-armed Yeti once lived a blissful, solitary life on a floating glacier. Here, he surfed the snowy slopes, studied ice sculptures and slurped his way through several squillion sensational snow cones. But an evil eye looked upon his every move. Kaos watched jealously for a glimpse of the secret ingredient that made Slam Bam's snow cones so sweet. When that didn't work, Kaos had the glacier destroyed. Little did Kaos know that it was a simple peppermint twist that gave the cones their extra kick. If only he'd thought asking.

Now homeless, Slam Bam drifted on a small floating iceberg. After several days, he hit land, which luckily happened to be Master Eon's island. One serious conversation and several snow cones later, Eon suggested Slam Bam to become a Skylander. So he did.[2]

As the Skylanders finished repairing the walls of the Eternal Archives, Slam Bam was mentioned as one of the Skylanders present during its restoration. Gill Grunt was about to sing a song about their accomplishment, and Slam Bam quickly encased himself in a block of ice to muffle the noise of the Gillman's horrible singing.

Slam Bam accompanied Eruptor and Grim Creeper as part of a mission to answer a call of help in The Frozen Seas. After saving an exedition camp from a group of Cyclopses lead by Bloodshot, he and the two other Skylanders came upon a tunnel that lead to what remained of a frozen kingdom. Upon seeing another clone of Eruptor frozen in ice, Master Eon appeared and explained that the kingdom belonged to King Nefarion, a wicked being who terrorized Skylands with the Mask of Power. The old Portal Master further explained that Eruptor Eruptor will eventually go back in time and become frozen in ice. Suddenly, strange changes began to occur, as Kaos had made his way to the past and began changing history. Before their eyes, Professor Splinters morphed into a servant of Kaos, affected by the time change, and Master Eon quickly teleported them to safety.

Once at Eon's Citadel, Master Eon explained that Kaos went back in time using Nefarion's coin Bloodshot stole and was able to change the past. With Master Eon's help, Eruptor, Grim Creeper and Slam Bam were transported to the distant past when Nefarion reigned over Skylands to stop Kaos.

Slam Bam was one of the Skylanders who assembled when Kaos and The Darkness approached Eon's Island. The yeti participated in the battle against Kaos and his minions along with some of the other Skylanders to protect the Core of Light. He was seen holding a Cyclops Chopper by the neck, before he, Gill Grunt, and Trigger Happy looked up in surprise at the sight of the Hydra appearing and destroying the Core. Slam Bam, along with the other Skylanders, were then banished from Skylands to Earth, where he was turned into a toy and awaited the new Portal Master to help him save Skylands.

Slam Bam has the ability to create ice sculptures to trap his enemies in and slow them down. He can also battle opponents with his powerful four fists. 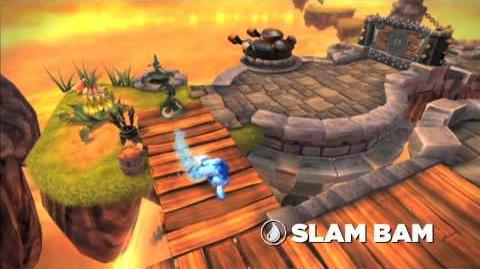 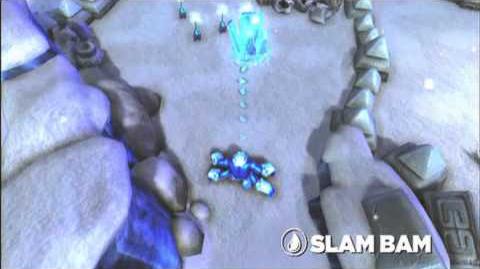 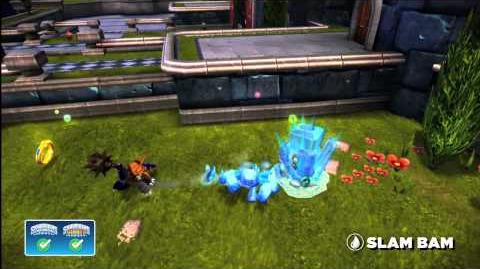 Retrieved from "https://spyro.fandom.com/wiki/Slam_Bam?oldid=105389"
Community content is available under CC-BY-SA unless otherwise noted.