Bomb throw
Gator spell
Shockwave spell
Belly bounce
Sleepyhead[1] is a Rhynoc wizard from Spooky Swamp in Spyro: Year of the Dragon. He is a mini boss in the game.

Sleepyhead is a large blue Rhynoc wearing aqua green-colored robes resembling a mixture between a wizard's outfit and nightshirt, printed with stars and crescent moons. His wizard hat also has the same texture.

His tired eyes look half-shut for a groggy expression, hence his name.

To awaken the slumbering wizard, light all four Tea Lamps in the level. Bubba, a resident of Spooky Swamp, will then allow you to go through.

Sleepyhead will start by waking up and throwing a bomb at you. Once landed, charge the bomb back at him before the timer dies out. This is the only way to harm Sleepyhead, as flaming and charging, flying toward him will result in Sleepyhead using his belly to bounce Spyro harmlessly away from his platform.

He will then summon three Gators. Defeat them all to make it easier, and he will proceed with throwing another bomb at you. If any gators aren't defeated after the bomb hits or misses Sleepyhead, the wizard will create three red orbs in his hands and hurl them onto the ground in front of him. Each will explode in a small red shockwave that can be avoid by running or jumping, and the waves will also knock out any nearby Gators.

Continue charging the bombs at him until his HP is depleted it will take four hits of the bombs to defeat him. And you will be given the Dragon Egg containing Herbi. 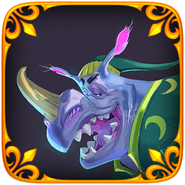 Sleepyhead as a Spyro Reignited Trilogy PSN trophy.
Add a photo to this gallery

Retrieved from "https://spyro.fandom.com/wiki/Sleepyhead?oldid=123048"
Community content is available under CC-BY-SA unless otherwise noted.