Space Cows are enemies encountered in the second, third, and fourth Spyro games. They appear as bipedal cows wearing space-helmets and ray-guns.

The Space Cows first appear in the level Metropolis, where they are among the space-themed barn animals terrorizing the city. One of the drones claims they came from "the farms" (probably Robotica Farms). In this game only, there are two varieties: a Standard Space Cow and an Armored Space Cow.

Standard Space Cows fire their laser guns at the ground in a 90-degree motion. They do not directly aim at Spyro even if he steps too close, but their lasers can still harm him if he is within their firing range. Simply jump over the lasers and flame the Space Cows to defeat them, as they are too big to charge.

Armored Space Cows carry a shield and a blaster gun. Unlike their standard counterparts, they will aim to fire at Spyro if he steps too close to them. Because they also are too big to charge, Spyro must wait for them to lower their shields in order to flame them before they can shoot him.

It should also be noted that the Armored Space Cows do not wear space helmets like their laser-wielding brethren.

Spyro 3: Year of the Dragon

The Standard Space Cows reappear alongside another Metropolis enemy, the Flying Sheep Saucers, in Country Speedway. They attempt to shoot farmers with their ray guns but are stopped by Hunter.

The cows make their final appearance in the level Crop Circle Country, where they are terrorizing farmers alongside the Riptoc. Notably, one of the Challenge Portals leads to an area where UFOs are abducting regular cows. It is possible these UFOs are turning the cows into Space Cows.

Unlike their predecessors from the second and third games, this variety can be charged to be defeated. 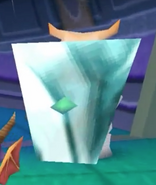 The Space Cows in Spyro: Enter the Dragonfly
Add a photo to this gallery
Retrieved from "https://spyro.fandom.com/wiki/Space_Cows?oldid=117434"
Community content is available under CC-BY-SA unless otherwise noted.