“A flying friend with some interesting fire power.”
—Master Eon

Sparx, also known as Sparx the Dragonfly, is a character and a magic item available exclusively found in the Dragon's Peak Adventure Pack in the Skylanders series.

When unlocked, Sparx helps the Skylanders by attacking enemies and surrounding objects with fireballs. When an enemy is hit by Sparx's fireballs and is later defeated, they will turn into a butterfly which Sparx will eat (only in the Wii version of Spyro's Adventure), while in the other console versions, he kills them for the Skylander to eat, allowing them to regain their health.

Sparx as seen on Skylanders: Universe 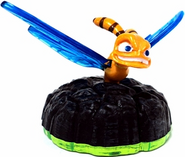 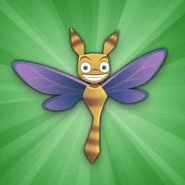