In The Legend of Spyro: A New Beginning, Spyro first encountered a Spirit Gem within the old confines of the Dragon Temple. After smashing the gem, the young dragon remarked that he felt like he "had to hit it," and when he did, "the power of a thousand suns surged through [his] body," much to the bafflement of Sparx. Ignitus later explained that the Spirit Gems were a gift from the ancestors.

In The Eternal Night, The Chronicler told Spyro how Malefor taught the Apes to artificially harness the power of the Spirit Gems for their evil purposes. Not only were the Spirit Gems a gift from the ancestors, but they serve as the Dragons' lifeforce.

In Dawn of the Dragon, after being freed from the time crystal, Spyro and Cynder used a Spirit Gem cluster to recharge their magic. The Chronicler, through an illusion generated by the gem cluster, bestowed both dragons their respective elemental abilities. 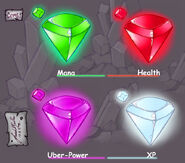 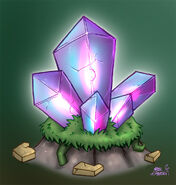 The Spirit Gem Clusters as depicted in Dawn of the Dragon
Add a photo to this gallery
Retrieved from "https://spyro.fandom.com/wiki/Spirit_Gems?oldid=125705"
Community content is available under CC-BY-SA unless otherwise noted.