The fireflies that inhabit the Swamp speak in constant haiku and are peaceful creatures. Unfortunately, they are bullied by alligators and Rhynocs, and live in fear of the Wizard whose lair is opened once all of the tea lamps are lit. Spyro will have to eliminate these enemies, and take down the Wizard, in order to bring back peace to the realm.

The swamp has water filled with piranhas that will attack anyone that dares enter it, so it is advised to stay on land.

After the Sorceress' initial defeat and Spyro takes back his gems, Moneybags eventually retires here (somehow getting here via Crystal Islands) to become a haiku poet.

Tucked in for a Long Slumber

Sometimes, there will be a chance that you'll be unable to obtain one gem in this realm, and Sparx will not point out where it is. If this happens, and you cannot find it, then it will be impossible to enter Super Bonus Round without cheats, and even then, you cannot fight the Sorceress the second time without hacking. This is known to happen in the PAL version. 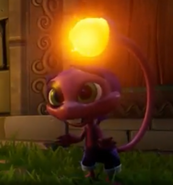 The fireflies in the Spyro Reignited Trilogy 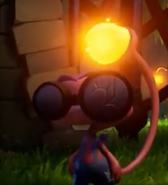 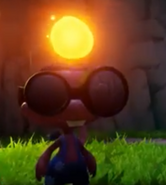 A shot of the beginning of Spooky Swamp in Spyro Reignited Trilogy.
Add a photo to this gallery

Retrieved from "https://spyro.fandom.com/wiki/Spooky_Swamp?oldid=122036"
Community content is available under CC-BY-SA unless otherwise noted.