View source
watch 02:53
GTA: The Criminal Enterprises - The Loop
Do you like this video?
Play Sound

The game introduces a new antagonist, Red, a former Dragon Elder banished years before the events of the game, and sees the protagonist, Spyro, attempt to defeat him by destroying the Dark Gems that fuel his power with the aid of his best friend Sparx the Dragonfly, Hunter the Cheetah, Sgt. Byrd the flying Penguin, and a new character, Blink the Mole.

Since Spyro's last adventure and after the defeat of Ripto, all has been tranquil in the Dragon Realms. Unfortunately, Gnasty Gnorc, Spyro's first enemy, has been brought back to life. Returning to the Dragon Realms with his Gnorc minions, he planted huge dark stones throughout the Dragon Realms and sent his minions with dark stones into a portal to other Realms. But Gnasty wasn't alone; he was with a red dragon carrying a staff with a similar dark stone at the end. The red dragon used his staff's dark power to create a barrier by the entry to Gnasty's lair so other dragons wouldn't interfere before flying off. The Professor saw what had happened on his computer screen, and quickly summoned Spyro and Sparx to his lab, showing them what had occurred. Spyro was told by the Professor that the dark stones are Dark Gems, which fuel the evil power Red, (the red dragon). Spyro quickly charged out of the lab's door and went off to destroy the Dark Gems.

Spyro goes to visit Dragon Elder, Tomas, and discovers that Red was once a Dragon Elder. The young dragon then learned how to destroy Dark Gems with his Horn Dive. Spyro found Sgt. Byrd nearby, who told Spyro that he would help him on his quest. When Spyro was traveling in Crocovile Swamp, Spyro freed a Mole named Blink, who is the Professor's nephew, and became allies. Spyro came across with another Dragon Elder named Magnus, who told Spyro that Red was part of the Order of Dragon Elders, till his hunger and lust for power made him try to overthrow their leader. Magnus then taught Spyro how to Pole Spin. After Spyro found and destroyed all ten Dark Gems in the Dragon Kingdom, the barrier leading to Gnasty's Lair was broken. Spyro defeated Gnasty in a battle and was granted the power of Electric Breath by a fast-talking Electric Fairy. The electric breath can activate electronic devices and short-circuit robotic foes.

Spyro then used the Professor's teleporter to go to the next Realm, the Lost Cities. Before Spyro arrived, Red was furious that Gnasty was defeated by a "dragon whelp", and he sent Ineptune, a huge, mermaid-like sea witch who is fond of pollution, to deal with Spyro. Spyro travelled to the Cloudy Domain to speak to another Dragon Elder named Titan, who was once a good friend with Red until he turned evil and was banished for his terrible crimes. Titan taught Spyro how to use Wing Shield ability, which reflects blunt projectiles. After Spyro destroyed the 20th Dark Gem, the barrier leading to Ineptune's lair was destroyed. Spyro then defeated that nasty sea witch and acquired Water Breath from a Water Fairy, which he can use to slow down enemies and activate water-triggered machinery.

Spyro used the Professor's teleporter again to go to the next Realm, the Icy Wilderness. Red was enraged of what had happened, so he sent a mammoth to stop Spyro. When Spyro found the mammoth, he was so cocky that the mammoth easily defeated him. Sparx, however, was able to escape and got help from Spyro's old friend and rival, Hunter the Cheetah. Hunter rescued Spyro from captivity within the Ice Citadel. After that, Spyro found Astor, another dragon Elder, who was trapped in a dungeon. Astor taught Spyro how to do the Wall Kick ability, which lets him climb up walls that are close together. After Spyro destroyed the 30th Dark Gem, Spyro finally confronted Red in combat. During the fight, Red claimed that Spyro is no match against his "infinite power", but Spyro defeated him. Red was able to escape, but "accidentally" dropped his staff, which released the Ice Fairy, who granted Spyro the Ice Breath ability, which temporarily freezes enemies and stream jets, which become icy poles to spin to and jump from.

Spyro then gained access to the last Realm, Volcanic Isle. The Professor said to Spyro that Red is hiding in a factory hidden deep within the volcano. Being a mole, The Professor tried to dig to his lair himself while Spyro found a way in. Spyro ventured into the volcano, and forces his way into the Dark Mine, destroying Dark Gems along the way. Once he arrived in Red's factory and destroyed all 40 Dark Gems in the Realms, Spyro found the Professor held captive by Red, and forced to improve the Gnorc minions by giving them armor, intelligence helms, etc. Red interrupted their conversation and claimed that he had the upper hand, but Spyro disagreed and pushed Red into a lab room. The Professor claimed he would help stop Red, but his attempts only transformed him into Mecha-Red, a larger, more powerful version of the dragon with robotic weapons. After many attempts, Spyro defeated Red once and for all, and the Professor shrunk him down to a "more manageable size" and plans on using Red as an assistant and for a good use for his laboratory. Thus, the story ends happily.

During early development, Spyro: A Hero's Tail was called Spyro: The Dark Realms.[1] Its level design, cutscenes, and polygon complexity were inspired by those from the Jak & Daxter game installments developed by Naughty Dog. Five homeworlds were planned, the fifth being called "Secret Hideout", consisting of Dark Mine, Red's Laboratory, and Red's Lair. "Secret Hideout" merged with the fourth homeworld during development.[2]

The game received mixed to averge reviews. A Hero's Tail is regarded better than Spyro: Enter the Dragonfly, but it still fell short of Insomniac's original three Spyro games. However compared to the originals, A Hero's Tail is considered to be aimed at a younger audience, leading to some harsh criticism, such as its short length and lack of general difficulty or originality.

GameSpot gave the game 5.8 out of 10: "Although Spyro's production values have shot up, its gameplay has remained more or less the same since the series' 1998 debut. Back then, players lacking Nintendo 64s didn't have too many good 3D platformers to choose from, so Spyro's gameplay foibles were acceptable, in light of its uniqueness. The novelty has worn off. Today, modest improvements on this tired formula, like giving Spryo's once-vestigial, T-rex-like arms the ability to grip ledges, just aren't enough to make the game feel innovative. Filling the title with disruptive and boring minigames to artificially increase play time apparently wasn't a good move, either. Despite all the new window dressing, Spyro: A Hero's Tail is the same game you played six years ago, and you probably remember it being better."[3]

IGN gave it a 7 out of 10, praising the game for having a decent amount of fun with its challenges and length, but criticizes its lack of innovation in style and play mechanics.[4] 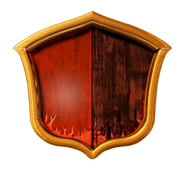 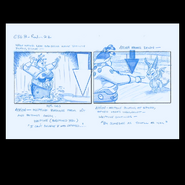 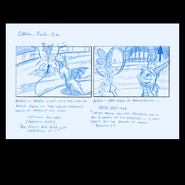 Storyboard of Aqua being freed 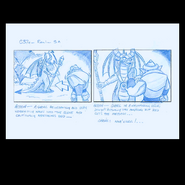 Storyboard of Red on Coastal Remains 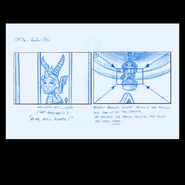 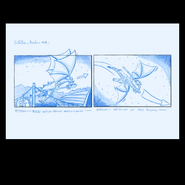 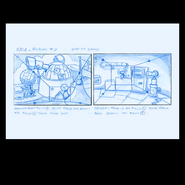 Storyboard of the ending