Spyro is assisted by many characters during the course of Year of the Dragon. Sparx functions as the player's health meter and assists the player in gathering gems; Sparx is a playable character in certain levels. Also aiding Spyro is Hunter, who teaches the player game mechanics and is a playable character at special racing levels. Four other playable characters are freed from Moneybags during the game; these include Sheila the Kangaroo, Sgt. Byrd the Penguin, Bentley the Yeti, and Agent 9 the Monkey. The primary antagonist of the game is the Sorceress, a tyrant who rules over the Forgotten Realms with her forces. Aiding her is the apprentice Bianca, who attempts to hinder Spyro on his mission.

There are 4 Homeworlds in "The Forgotten Realms", all named after times in the day. Each Homeworld contains at least 4 normal Realms (2 that are already open and 2 that require a specific number of eggs to unlock), 1 rebel Realm which acts as a tutorial for each of Spyro's allies, 1 Speedway which also requires eggs to unlock, and 1 Sparx Realm which can only be accessed by defeating the Homeworld's Boss. After completing a normal Realm in one of the first 3 Homeworlds, an inhabitant of that Realm will travel to the respective Homeworld to help build a vehicle that will enable Spyro to travel to the next world, but not before defeating the Sorceress' most powerful creatures, which acts as that Homeworld's boss. In the final Homeworld, Spyro confronts the Sorceress herself and defeats her. There is also one additional Realm that requires completing everything else in the game.

The starting Homeworld, this world is set during the morning with lush green hillsides, small woods and lakes.

The second Homeworld, Midday Garden, is set during the day with a blue sky overlooking wide gardens and large towering castles.

The third Homeworld, Evening Lake, is set during the evening inside a large lake containing parts of a submerged Tudor-style castle.

The final Homeworld, Midnight Mountain, is set at night on top of a high mountain.

The game opens with the aftermath of a celebration in the Dragon Realms. The Dragons are celebrating the Year of the Dragon, an event when every 12 years new Dragon Eggs are brought to the realm. After the celebration however, a cloaked anthropomorphic rabbit girl, Bianca, invades the Realms with an army of Rhynocs and steals all of the Dragon eggs. As Bianca steals the last egg, she accidentally woke up Hunter causing him to release a yowl of pain that woke up Spyro and the other dragons. They were unable to stop her and she escapes with the egg in tow. Spyro, along with Sparx and Hunter, are sent down a hole to find the thieves and recover the Dragon eggs.

Pursuing the thief, Spyro discovers a realm once inhabited by the Dragons, but long abandoned and forgotten, now known only as the "Forgotten Realms", ruled by a queen called "the Sorceress", and under firm control of her Rhynocs army. Of the few that question the Sorceress' rule, the first is a kangaroo named Sheila. She is held prisoner by Moneybags within a cage, but is released after you pay a "small fee" to him. Sheila kicks him in the stomach and knocks Moneybags out.

As Spyro travels through each realm, acquiring aid from local inhabitants, and bartering with Moneybags for passage to new areas and freeing Sgt. Byrd and Bentley, The Sorceress abducts and imprisons Hunter after hearing that he saved Bianca back at Midday Gardens. It is later revealed that the Sorceress is seeking not the baby dragons themselves, but merely their wings to concoct a spell that can grant her immortality. Once Bianca finds this out, she feels sorry for the baby Dragons, and defects to side with Spyro, Hunter, and the others who question the Sorceress' rule.

Celebrations resume after the Sorceress' defeat, although Spyro is unable to locate Hunter. Searching throughout the realm, Spyro's friends are reluctant to say anything of Hunter's whereabouts until the young dragon ultimately locates Hunter out on a date with Bianca, and laments about another hero "falling" for love.

However, it later turns out that the Sorceress survived her previous battle with Spyro, and is found in the Super Bonus Round, waiting for Spyro on her UFO. Spyro and the Sorceress battle again, on two UFOs above a pool of unknown, but deadly liquid. Eventually, Spyro manages to shoot the Sorceress down, and she falls into the liquid below, presumably killing her. After she dies, it becomes apparent that she had the final Dragon egg, which hatches two baby dragons named Yin and Yang.

The baby dragons then return to the Dragon Realms as the game closes.

The gameplay is somewhat similar to its two predecessors. There are four homeworlds in this 3-D platform game and in order to proceed to the next world, Spyro must defeat the boss of the world. However, to travel to these boss arenas, Spyro must make his way to the four normal realms and the one rebel realm in that particular homeworld to rescue a villager who powers the vehicles which enables access to these bosses.

These realms are free to explore and wander in all directions without any time limit. The realms are littered with enemies which attack Spyro. Spyro can defeat these enemies, and as a reward receive gems, these gems can be used later in the game. Gems also lay all over the level on the ground and inside crates. The levels are also littered with non-playable characters which inform you on the state of the realm.

To enter all of these realms you must travel via portals, some portals can not be entered unless you acquire a certain amount of dragon eggs. To enter all the rebel realms, you must pay Moneybags gems that were collected to release the rebel who is blocking the way into the realm.

As said above, to access some realms, it is necessary to collect a certain amount of eggs; these eggs can be acquired by locating them or as a reward for completing one of the minigames inside the realm. There are many different minigames, which reward you with these eggs such as sliding down a slide, skateboarding, saving a wolf, collecting bones, catching thieves, or battling bosses.

Spyro can also run into Powerup Gates which give him special abilities for a period of time (time left can be seen on a bar on the right of the screen). These abilities could be superflame, superfly, or invincibility. Like in the last two games, there are some areas where you can supercharge, this means that when you charge on a certain track, you go super fast and can break heavy crates or catch fast thieves.

Once you have defeated The Sorceress, there is an option of getting 100% (which requires collecting 149 eggs as well as all 15,000 gems). Once you have achieved this, the last portal on Midnight Mountain will open; it is called Super Bonus Round and contains the 150th egg, as well as some extra minigames and tons of treasure.

Development of Spyro: Year of the Dragon spanned about ten and a half months, from November 1999 to September 2000; the development team was influenced by a host of other games, including Doom and Crash Bandicoot.[1] Among the new features touted before the game's release was "Auto Challenge Tuning", which Insomniac CEO Ted Price described as "invented to even out the gameplay difficulty curve for players of different abilities".[2] The levels were made much larger than those in Spyro 2, so that more areas for minigames could be added; to prevent player confusion on where to go next, these areas were designed to load separately from the main hubs.[3] Price stated that the addition of critters was a way to make the game more enjoyable and varied, instead of just adding more moves for Spyro. The game was named "Year of the Dragon" simply because it was released during 2000, the year of the Dragon in the Chinese zodiac.[4]

In previews, publications such as IGN and GameSpot noted that the graphics had been improved, and that there were many new characters and locations.[5] The new minigames were previewed, and IGN pointed out that they offered enough complexity to back up the simple gameplay.[6] In an interview with GameSpot, Ted Price stated that the emphasis for the title was on the new critters, but that Spyro would not be left behind in the story.[7] Year of the Dragon also implemented crack protection, in addition to the copy protection previous games had contained. This helped prevent hackers from cracking the game until two months after release.[8]

Upon release, Spyro: Year of the Dragon garnered positive critical reaction, with the game receiving an average ranking of 91% at Game Rankings, and a similar score based on fifteen reviews at MetaCritic.[9] According to Game Rankings, Year of the Dragon is the fourteenth highest rated PlayStation game of all time. The game sold more than two million units in the United States.[10]

GameSpot noted that while Year of the Dragon made no significant changes to the formula of its predecessors, the combination of new playable characters, more detailed graphics, and the variety of minigames made the game worth the buy.[11] IGN praised the game's appeal to all ages and the polished levels, as well as the successful multi-character focus.[12] Game Revolution thought that while the game's premise itself was simply a rehash of previous titles, "the story that unfolds as you actually play the game is flawlessly interwoven and quite entertaining".[13] GamePro noted that the ability of the game to automatically drop the difficulty if players get stuck was an excellent feature. Next Generation Magazine's Kevin Rice provided one of the most positive review in which he stated the top-notch level design, intuitive controls and excellent graphics made the title the best Spyro game to date, and arguably the best PlayStation game overall.

Stewart Copeland's score was generally well-received, though several critics sharply disagreed with the general consensus. Publications like PSXExtreme thought the music helped bring atmosphere to the varied worlds,[14] and Allgame enthused that "Insomniac should be commended for realizing the importance of music in games; it seems to enhance the whole experience."[15] Others, such as Joseph Parazen of Game Revolution, thought the background music sounded "identical to every other 3D, cartoony, action platformer I've ever played". Other points of praise were the voice acting and character development. Among the few complaints aside from the story included the game camera, which could be difficult to control and led to unjustified enemy attacks. Some publications warned that the game might feel too much like its predecessors, with a similar plot and objectives.[16] 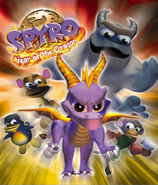 Another Spyro: Year of the Dragon wallpaper showing Spyro and his allies

Spyro: Year of the Dragon wallpaper of Spyro on his skateboard

Spyro: Year of the Dragon wallpaper of Spyro crouching down

Spyro: Year of the Dragon wallpaper of Spyro in Fireworks Factory

Yet another Spyro: Year of the Dragon wallpaper of Spyro in Fireworks Factory

Spyro: Year of the Dragon wallpaper of Sheila the Kangaroo in Sheila's Alp

Spyro: Year of the Dragon wallpaper of Sgt. Byrd in his base

Spyro: Year of the Dragon wallpaper of Bentley the Yeti in his outpost

Spyro: Year of the Dragon wallpaper of Agent 9 in Agent 9's Lab

Early version of the logo, as seen in demos.