View source
watch 02:52
Roblox: DeepWoken - The Loop
Do you like this video?
Play Sound

ESRB: E for Everyone
CERO: A for All

Spyro the Dragon (スパイロ・ザ・ドラゴン) is a platform video game developed by Insomniac Games, and released at September 9th, 1998 in North America for the PlayStation. It stars the titular protagonist, Spyro the Dragon, a young purple dragon saving the elder dragons, collecting gems, and defeating enemies. It is the first game in the Spyro the Dragon series.

This game is remastered as part of the Spyro Reignited Trilogy along with Spyro 2: Ripto's Rage! and Spyro: Year of the Dragon.

The game takes place in the Dragon Realms, a sprawling world of much topographical and biological diversity, ornate structures and abundant treasure. It contains six homeworlds, the first five of which are named after the dragon clan that resides there:

Each homeworld has its own set of realms which can be accessed via portals in archways scattered throughout the homeworld. Once in a realm, Spyro may return to the homeworld by finding and entering that realm's unique "Return Home" whirlwind platform or by pausing the game and selecting "Exit Level."

The adventure begins in the Artisans homeworld in the Dragon Realms (presumably Spyro's home) in Stone Hill on the day where the elder dragons, Astor and Lindar, are being interviewed for a video documentary about their world. Little do they know, Gnasty Gnorc (pronounced Nasty Norc), whom they previously banished from the Dragon Realms long ago to the Dragon Junkyard, somehow overhears their derogatory comments about him and becomes quite upset. While in exile, Gnasty Gnorc has experimented with magic and on this fateful day, he decides to unleash two of his most powerful spells vengefully: one which freezes all the unsuspecting dragons inside crystalline statues and another which transforms a portion of the dragons' treasure into an army of gnorcs.

However, Gnasty Gnorc misses imprisoning the youngest dragon in the realm, Spyro (who was seen chasing sheep in the background during the dragons' documentary shoot), because of his small size. Seeking to set things right, Spyro sets out to free all of the dragons. Traveling across the Dragon Realms, Spyro faces various adversaries and eventually manages to release all the dragons, who give him advice in return.

Spyro finally reaches the Dragon Junkyard, where Gnasty is waiting. After a battle, Spyro defeats Gnasty, putting an end to his evil plot once and for all.

Like most platformer games, there are nearly certain unfortunate events that can lead to Spyro's death. Sparx the Dragonfly follows Spyro around and indicates Spyro's health. Every time Spyro is hit, Sparx changes color:

To replenish Sparx back to yellow, Spyro can defeat fodder, which will spawn a butterfly. Sparx will then eat it, causing him to regain one level of health. Small silver statues of a dragon can help back up extra lives (also known as 1UP's) that will revive Spyro. If Spyro dies, then don't fret! You will either go to the beginning of the level or the pedestal of the last saved dragon. If Spyro doesn't have any lives, Spyro will have to start the level over from the beginning of the world (in Beast Makers and Dream Weavers worlds; at any point Spyro is in a realm other than the home world, the starting point is right outside the entrance to a specific realm). Remember, Spyro may have more lives than a cat, but keep an eye on his life count. One wrong move could send you to the game over screen, where you will have to start the level you were on from the beginning.

The very first homeworld in the game, it is a peaceful country where dragons can enjoy simple lives as artists, poets, chefs and other such professions.

A harsh wasteland where dragons can hone their skills in battle, becoming honored veterans.

A snowy tundra high in the mountains where dragons can practice the arcane in solitude.

A vast swampland abundant with various creatures where dragons can create new forms of life.

A fantastic kingdom floating in the sky where dragons manipulate the fabric of dreams.

Gnasty Gnorc's personal country where he reigns supreme with army of vicious Gnorcs.

According to Insomniac Games on the television series Icons, sales on Spyro the Dragon were initially slow at the game's launch but quickly picked up following the holiday season. In the week of November 29, 1998, it was the 3rd best-selling game in the UK, behind Tomb Raider and FIFA 99.[1] By December 1999, the game had sold a million copies in North America.[2]

The game was also praised for its tight control and highly memorable soundtrack. Although the game may be too easy for some, it is considered to be a great place to start in either the Spyro series or video games in general. GameSpot rated the game as 8.3, describing it as having very good graphics for its time, and being one of the first well-received full-3D platformers for the first PlayStation. IGN's Craig Harris hailed it as the most fun 3D platformer he had played since Crash Bandicoot, writing "Two claws up. Way up."[3] 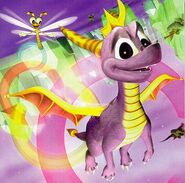 Spyro flying in a speedway 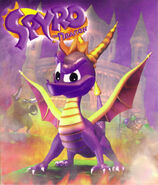 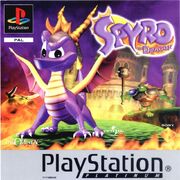 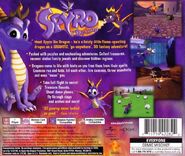 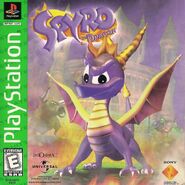 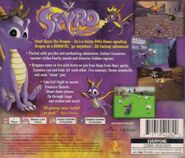 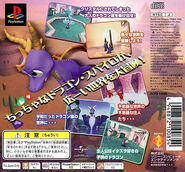 Back Cover for Japan release 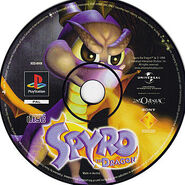 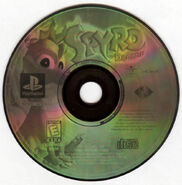