The Statistics (or stats) define the overall strength of a Skylander in various areas in Skylanders: Spyro's Adventure. Which stats are used varies per game. The console versions uses a set of stats similar to those found in many RPG games. The 3DS version uses the Skylander's level to determine the height of all other stats, as well as which abilities are available.

The Power Stats mentioned on the official website and figure cards are not used in any of the games.

In the console version of Skylanders, gaining levels only increases health. To increase the other stats, Skylanders will have to complete Heroic Challenges given by Cali. They can complete these on any console, regardless of ownership. 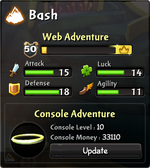 The level of the Skylanders in Skylanders: Universe is called "Heroic Level" and is tracked seperately from those gained on the console/3DS.

Retrieved from "https://spyro.fandom.com/wiki/Statistics_(Skylanders)?oldid=86586"
Community content is available under CC-BY-SA unless otherwise noted.