Stealth Elf (ステルスエルフ Suterusu Erufu in Japanese) is an elven ninja who is one of the playable Skylanders in the Skylanders series, first appearing in Skylanders: Spyro's Adventure. She also has a Legendary counterpart called Legendary Stealth Elf, who is a Toys R Us exclusive.

Stealth Elf has a Ninja counterpart that is available in the console Starter Pack of Skylanders: Swap Force.

Stealth Elf represents one of the more tactical Skylander designs. The core abilities are much like Ilwrath Avenger from Star Control 2. Early on, Toys For Bob was still figuring out the Skylanders formula so they see Stealth Elf with a not-very-combat-effective mobility only move in the Arboreal Acrobatics upgrade. While the controls are crisp and responsive, the move only really shines in the Pook Blade Saint upgrade path. The Shadowsbane Blade Dance upgrade turns Stealth Elf's Arboreal Acrobatics into a flying blender. The Forest Ninja upgrade path allows players to leverage positioning all the while dropping aggro from enemies. The Blade Fury combo attack draws influence from Rock Lee's Ura Renge.[1]

Stealth Elf, like all elves, adores nature. She is considered a guardian protector of the forests and of Skylands. She may be a highly trained ninja, but sometimes Stealth Elf is known to have a sense of a rampaging Cyclops Mammoth.[2] Like all Life Skylanders, Stealth Elf prefers to keep her feet on the ground.

As a small child, Stealth Elf awoke one morning inside the hollow of an old tree with no memory of how she got there. She was taken in by an unusually stealthy, ninja-like tree creature in the deep forest. Under his tutelage, she has spent the majority of her life training in the art of stealth fighting. After completing her training, Stealth Elf became a Skylander, putting her skills in good use while also trying to uncover the mystery behind her origins.

Stealth Elf can't remember much about her family or from whence she came. But she is the only Skylander who can skewer and slice through a platoon of ne'er-do-wells before slipping away unseen. Stealth Elf's earliest memory is of waking with a start and screech, following a nightmarish dream of stampeding sheep. But when she awoke there were no woolly warriors in sight - only woodland and a complete memory blank. With a sniffle and a sigh, she picked herself up and set off in search of answers. After several days, she stumbled on a gnarled, stumpy-looking creature with the lightning moves of a ninja master. It turned out the creature was the guardian of the forest and trained in the ancient art of stealth.

Sensing the young elf's skill for sneaking, the guardian immediately made her his apprentice. Sure enough, Stealth Elf was a natural and soon, ran rings around her increasingly ragged sensei. Master Eon was invited for a look, and was knocked out by her nifty ninja skills. She was made a Skylander on the spot and served not only guardian of the forests, but protector of the world.[3]

After investigating Stinky Swamp, Stealth Elf returned to Eon's Citadel to inform the veteran Portal Master of a terrible monster lurking within the swamp. She was then accompanied by Spyro to search out this monster, saving a Mabu named Snuckles from Chompies along the way. The Mabu explained that he was looking for a friend, Nort, who went missing in the swamp. The two Skylanders were then attacked by an unusually giant titchy toad, whose toxic saliva caused Spyro and Stealth Elf to fall asleep while Snuckles was nearly eaten and torn apart by the titchy toad. The Mabu was saved by the timely arrival of Kaos, who claimed that he was turning over a new leaf by defeating evil doers and also having saved Nort from the toad. Stealth Elf was woken up by Spyro in time to hear Kaos renouncing his evil ways before he departed, leaving Spyro and Stealth Elf in disbelief.

As news of Kaos saving the residents of Skylands from mega-sized creatures were made known, Stealth Elf stayed behind while Jet-Vac, Drill Sergeant, and Spyro were instructed to go to the Desert of Columns to help a Molekin named Diggs escape from a mega-sized monster.  When the Skylanders returned, Stealth Elf accompanied Spyro, Trigger Happy, and Drill Sergeant to help the Warrior Librarians of the Eternal Archives protect the Archives from being taken. During a battle against mega-sized Chompies, Kaos appeared and revealed his true intentions of him claiming to be a hero: he wanted to test his magic staff on a few creatures (growing them into a giant size), trick people into thinking he was saving them just so he could attack the Archive and blackmail its curator, Wiggleworth, into giving the evil Portal Master a forbidden book within the Archives.

During the struggle against Kaos and the giant Chompies, Stealth Elf stole Kaos's staff and used its magic to supersize Spyro to allow him to battle the mega-sized Chompies. However, Kaos stole back his staff and shrunk Stealth Elf down to the size of an ant. As revenge, the tiny elf stabbed one of her daggers into Kaos's ankle like a splinter, causing the evil Portal Master to painfully drop his staff and allowing Drill Sergeant the chance to destroy it, returning Spyro and Stealth Elf back to their normal size. The Skylanders soon defeated the giant Chompies and successfully drove away Kaos from the Eternal Archives.

Stealth Elf, along with Spyro, Gill Grunt, Stump Smash, and Eruptor, are still frozen as toys on Earth and were put in a toy display inside a toy store called Super Toy Planet. They were few of the Skylanders who witnessed Kaos breaking free of his statue-like form due to his power as a Portal Master. When Kaos noticed the frozen Skylanders and taunted them, Stealth Elf, along with the Skylanders, agreed with Stump Smash when the tree creature angrily declared that if he could move, he'd 'dropping the hammer' on Kaos right there and then. Afterwards, the present Skylanders could do nothing but watch as Kaos returned to Skylands with the use of a nearby Portal of Power.

Spyro is a fellow Skylander and ally to Stealth Elf, being in good terms with one another on most occasions.

Although Stealth Elf considers Drill Sergeant as an ally, she gets irritated by the Arkeyan bulldozer calling her 'sir' due to Drill Sergeant's original programming to obey orders.

Stealth Elf is extremely agile, able to skewer and slash swiftly at her enemies with her daggers and swords, and take down her foes by surprise. She can literally disappear, and at exactly the same time, create a decoy version of herself. As she does so, Stealth Elf uses invisible stealth to attack the enemies when they are attacking her decoy.

Her Forest Ninja path can also create replica scarecrows of herself wielding scythes to attack other advancing enemies. Her Pook Blade Saint path Elf Jitsu can release Poison Spores as a combo, she can also release a Blade Flurry as another combo. 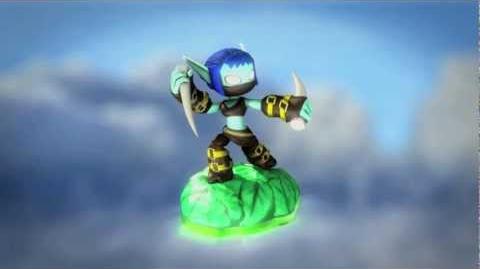 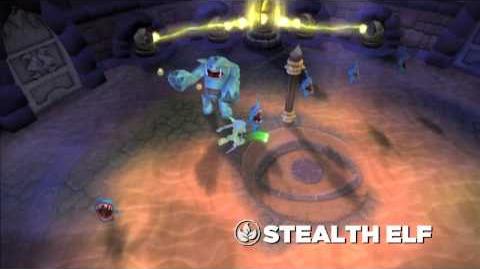 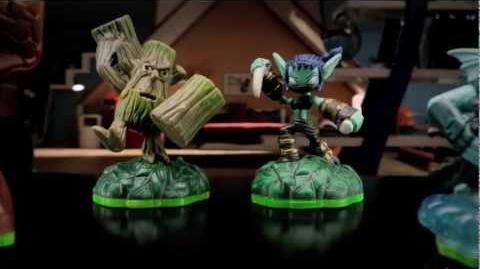 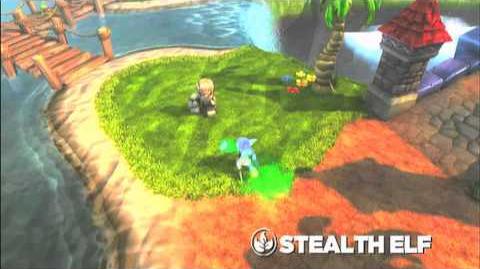 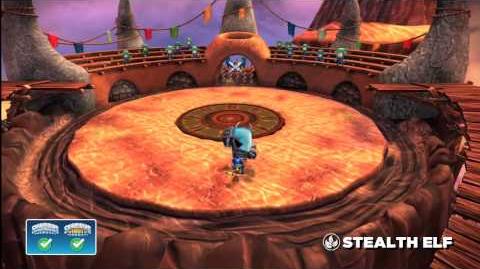