Sunburn (サンバーン in Japanese) is a phoenix dragon hybrid who is one of the playable Skylanders in the Skylanders series, first appearing in Skylanders: Spyro's Adventure. The Dragon's Peak Adventure Pack is the only product he is included in.

Like all dragons, Sunburn is quite the prankster, but hates evil with a passion.[1]

Born in the center of an active volcano, Sunburn is part dragon, part phoenix, and 100% fire power. He is very proud of his unique heritage, and is the only dragon and phoenix hybrid known to exist in Skylands. This rare combination makes him a desirable target for dark wizards and bounty hunters who seek to gain power by unlocking the secrets behind Sunburn’s ability to teleport. Joining the Skylanders gave Sunburn a way to help defend the world from evil, but also provided him with protection, as he remains one of the most sought after creatures in Skylands.

For years, soothsayers and psychics had predicted the birth of a dragon-phoenix cross. So, when the newly hatched Sunburn was catapulted into the world from his cozy volcanic nest, he became the drag-nix (or phoe-gon?) everyone wanted to meet. Sunburn became a target for every thief, bandit and evil sorcerer who wanted a piece of his powers. Thankfully, being able to both throw flames and teleport was a handy defense. Still for Sunburn, Skylands was not a safe place. Luckily, Master Eon also noticed his amazing abilities and made him a Skylander. This not only provided Sunburn with protection, but gave him a license to incinerate evil. It also provided plenty of opportunities to play teleporting pranks on his new teammates.[2]

Sunburn has the ability to breathe streams of fire. He also has a unique ability to teleport from one place to another, leaving a trail of flames behind. It is said that his body temperature is so hot that his very molecules can't remain in one place and will teleport to a new location. Truth to be told, this ability has nothing to do with temperature, but is in fact a side effect of Sunburn being the only known half-dragon half-phoenix to exist. 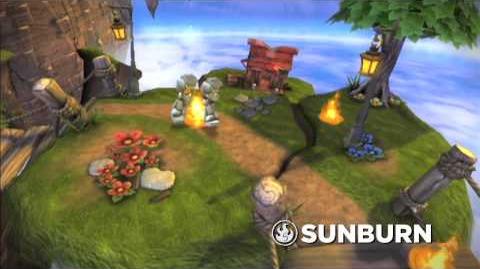 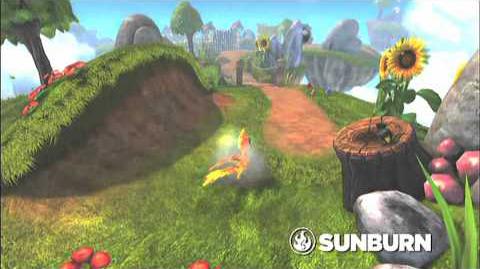 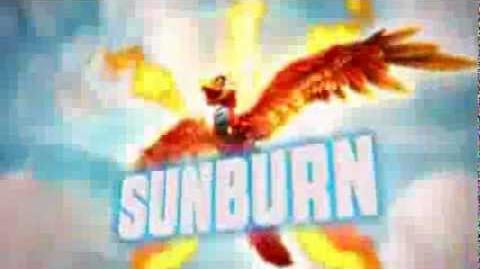 Retrieved from "https://spyro.fandom.com/wiki/Sunburn?oldid=105386"
Community content is available under CC-BY-SA unless otherwise noted.