The Art of Spyro:
Reignited Trilogy

"The Art of Spyro™ is a meticulously crafted compendium filled with in-depth behind-the-scenes content, insightful quotes from top illustrators in the industry, anecdotes from the game developers, and a dazzling assortment of incredible concept art, some of which has never been seen by the public. It is a must-have for art lovers, gamers, fans… and the fun-loving adventurer in all of us." 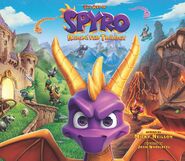 The placeholder image of The Art of Spyro: Reignited Trilogy

The full art cover of The Art of Spyro: Reignited Trilogy by Nicholas Kole
Add a photo to this gallery

Retrieved from "https://spyro.fandom.com/wiki/The_Art_of_Spyro:_Reignited_Trilogy?oldid=124693"
Community content is available under CC-BY-SA unless otherwise noted.