The Legend of Spyro:
A New Beginning

The Legend of Spyro: A New Beginning is the first game in The Legend of Spyro trilogy, a reboot of the Spyro series. It was developed by Krome Studios for the PlayStation 2, Xbox, Nintendo GameCube, and Game Boy Advance systems and Amaze Entertainment with a separate version for the Nintendo DS. The game is known for having a much darker setting than its predecessors.

A New Beginning uses a more action-based focus than previous Spyro the Dragon games, with a limited use of Spyro's gliding ability and less based on collecting items and playing minigames. Instead of this, Spyro has a variety of combat moves as well as four different breath attacks: fire, electricity, ice and earth, which he can use as both long range and short range attacks. Spyro can also use furies, huge blasts of elemental energy. The game has fewer levels than previous Spyro games, with six levels that progress from a starting point towards a final destination and boss encounter in a linear fashion, and two rail shooter style flying levels adjoining them.

The Nintendo DS version has additional attacks and challenges. As well as breath attacks and furies, Spyro can create an elemental shield around himself that protects him from enemies while hurting attacking enemies. Also, the DS version has extra side missions in the form of puzzles, and if all 40 puzzles are solved and all 40 crystals after solving a puzzle are collected, and 20 extra puzzles are solved, a Cynder skin will be unlocked.

The game begins inside the Dragon Temple, where a Fire Guardian Dragon named Ignitus watches over a brood of eggs; it was the "Year of the Dragon", a time every twelve years when new dragon eggs were brought to the realm. A dragons' prophecy told that every ten generations, a rare Purple Dragon will be born, who will direct the fate of that era; Ignitus was looking after such an egg.

The dragons are, however, at war with an enemy called "the Dark Master" who knew of the prophecy as well, and lay siege to the Temple, intent on destroying the brood of eggs to prevent the birth of the purple dragon. Ignitus escapes with the Purple Dragon's egg, leaving it to drift down the Silver River into a swamp, hoping for the best. The egg is discovered by a family of dragonflies, and upon hatching, they name him Spyro and adopt him into the family and raised as one of their own, alongside Sparx, a young Dragonfly who was born on the same day.

One day, after Spyro is under attack by a group of Apes and discovered that he can breathe fire, Spyro is told that he is not a dragonfly himself, but a stranger from a distant land. Afterwards, Spyro decides to leave the Swamp in search of his true home; Sparx, though reluctant at first, decides to tag along. Spyro is pursued by hostile forces, but eventually came into contact with a distraught Ignitus, who although pleased that Spyro is alive, feared that with the Temple under occupation by their enemy, a horde of Apes called the Dark Armies led by a large black dragon named Cynder, their war was already lost.

Spyro convinces Ignitus to lead him to the Temple, and is able to drive Cynder's forces out, after which Ignitus tells Spyro more about their war against the Dark Armies, offering Spyro some training in the art of fire, and then sends Spyro off to rescue three other Dragon Guardians from Cynder's forces. First, he flies to Dante's Freezer to find Volteer, the Electric Guardian, and rescues him from a large troll called the Ice King.

When Spyro and Volteer return to the Temple, Volteer trains Spyro in the art of electricity and explains to Ignitus that he lost some of his electric powers inside a crystal Cynder stored. Ignitus expects that Cynder may be planning to do something with the Guardians' powers, but he doesn't know what for, so Ignitus sends Spyro to Tall Plains, home of the Atlawa tribe, to find Cyril, the Ice Guardian.

After Spyro saves Cyril and heads back to the Temple, he teaches Spyro the secrets of ice and discusses with the other Guardians more about Cynder's possible plans. Ignitus hypothesizes that Cynder was trying to gain all the Guardians' elemental powers to open a portal that must never be opened. Spyro questions Ignitus of what is he talking about, but Ignitus tells him that doesn't concern him now, but he does send Spyro to Munitions Forge, where Terrador, the Earth Guardian, is held.

When Spyro gets ready to leave with Terrador, Cynder attacks and chases Spyro throughout Munitions Forge. Just when Cynder is about to catch Spyro, Ignitus intervenes in order to fight Cynder, but is captured. Spyro tries to help Ignitus, but Terrador stops him and tells him that he is not ready to take on Cynder. Spyro becomes guilt-ridden and ashamed that he let Ignitus down, becoming frightened to face Cynder. Terrador tells him that there's no shame for all warriors to have fear, and trains Spyro how to master the element of earth and his own fear.

After Spyro's training, Terrador explains to Spyro, Volteer, and Cyril about Cynder's lair, possibly where she took Ignitus. Spyro flies to Cynder's lair and finds Ignitus, confined and his powers being drainied inside a crystal. Cynder stops Spyro from destroying the crystal and escapes with it. Spyro notices that there was something familiar with Cynder, and Ignitus decides it's time to tell him the truth. Cynder was actually born from the same brood of eggs as Spyro (they are not siblings), taken by the Dark Master's forces and was corrupted by his poisonous powers, becoming his tool of destruction. The Dark Master was using Cynder to gain the Guardians' powers so she can unlock the portal, which serves as his prison. As the vortex to the world of Convexity opened, Ignitus fears that they are too late, but Spyro refuses to give up and follows Cynder through the portal.

When Spyro caught up with Cynder, she had already put the final crystal inside the portal, creating an opening for the Dark Master to escape. She was ready to face Spyro in a final showdown. Eventually, Spyro uses all of his power in a final attack and defeats Cynder, which ends up freeing her from the Dark Master's influence, returning to her true form; a young dragon the same size and age as Spyro. As the realm began to collapse in on itself and the portal started to suck the three inside; Sparx insists on making a quick exit, but Spyro declares he will not leave Cynder behind with the Dark Master; though barely, Spyro was able to grab Cynder and escaped safely.

Though victorious, the battle cost Spyro much of his own strength and powers, and both Spyro and Cynder suspected that the Dark Master is still alive somewhere; the war was still not over. The story continues in The Legend of Spyro: The Eternal Night...

Krome Studios were developing a game pitch on a different take on Crash Bandicoot. A demo was said to be in development, with the team concepting characters such Crash, Coco, Nina Cortex, Crunch, Aku-Aku, Dr. Neo Cortex, etc. At one point, Spyro was going to appear in the game to assist Crash in adult dragon form. The game was said to revolved heavily around a medieval theme and time period. Michael Graham and Christopher Wilson, the two Producers at Vivendi Universal that were slated to work on the Crash title were pulled onto something else - something that would eventually become The Legend Of Spyro: A New Beginning. Krome Studios' work on the Crash Bandicoot demo was a big audition for the new Spyro title and Vivendi liked what they had done. A deal was struck to bring the team over to the Spyro project and began to work on "Spyro06".[1]

Producer John Welsh stated that Krome Studios worked really hard to make A New Beginning a really fantastic looking game. Many of the previous Spyro games had softer tones and palettes and they wanted to move on from there. Having Spyro as a New Beginning meant that they could explore ways of developing the style and look into something that represented a maturing of the game and its environment, as well as taking full advantage of what the technology is capable of. Now palettes are stronger and darker, to generate the appropriate mood. For instance, Spyro is on a voyage into the unknown and the unknown can appear dark or isolated, certainly strange and perhaps even harsh. They have created lavish, gorgeously lit and intricate environments, establishing a consistent style unique to the new Spyro world. That style extends to everything in that world to the enemies that Spyro encounters, to everything with which Spyro can interact, and to the depth of the storyline where what is, is clearly linked to what was.[2]

The Legend of Spyro: A New Beginning received mixed but generally positive reviews. Critics praised the presentation and graphics but criticized the repetitive gameplay and poor voice-acting. Fans were disappointed by the emphasis on combat compared to previous installments in the Spyro series. IGN gave the game a "7.7 out of 10", complimenting that its overall gameplay, presentation and story, but noted the game's repetitive combat.[3] Gamespot's review gave A New Beginning a "5.8 out of 10", praising the musical score, but criticized the lack of consistency, the uninspired level design, the story script, and repetitive nature of the gameplay, claiming that "the developer took no chances with the game and brought nothing new to the table."[4] 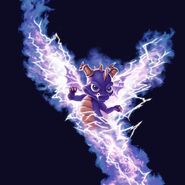 The Legend of Spyro A New Beginning Trailer

The Legend of Spyro A New Beginning - TV Commercial

Retrieved from "https://spyro.fandom.com/wiki/The_Legend_of_Spyro:_A_New_Beginning?oldid=124172"
Community content is available under CC-BY-SA unless otherwise noted.