Steals important items
The Thieves are recurring enemies throughout the Spyro series, although they also appear as friendly inhabitants in Spyro: Enter the Dragonfly and Spyro: Attack of the Rhynocs. They are mysterious creatures who wear striped robes and are known to steal precious items such as Dragon Eggs, gems, and keys, and then run around at high speeds while chanting their signature taunt of "Nah-nah-nah-nah-nah!" The Thieves are the native residents of the Thieves Den and the Thieves' Guild.

Blue Thieves make up the majority of the species, although there are also Thieves who wear green, yellow, purple, or red robes. Red Thieves in particular tend to be exceptionally fast, and often require a Supercharge to catch up to them. Green Thieves tend to be easier to catch than Blue Thieves. All Thieves are voiced by Carlos Alazraqui in Spyro the Dragon, and the same voice recording is used in future games. In the remake, they have visible pupils on their eyes. 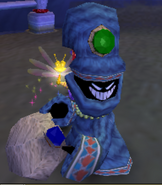 The friendly Thieves as they appear in their homeworld, Thieves Den.

Add a photo to this gallery
Retrieved from "https://spyro.fandom.com/wiki/Thieves?oldid=123157"
Community content is available under CC-BY-SA unless otherwise noted.