“Thank you for releasing me.”
—Thor

Thor (トア=グリヨワーム Toa in Japanese) is an Artisans dragon that appears in Town Square, as seen in Spyro the Dragon.

In the Spyro Reignited Trilogy, he is a ceramicist[2], appears a bit rounder and elderly and bent over with age, and has braided white hair on his ears and tail. He wears an apron, which is splattered with clay, there is also clay on his hands, and carries a painted pot filled with blue paint. He also wears small glasses. 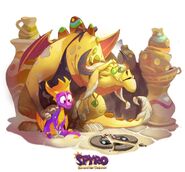 Retrieved from "https://spyro.fandom.com/wiki/Thor?oldid=118435"
Community content is available under CC-BY-SA unless otherwise noted.