“Welcome to Peace Keepers. Look how our treasure has been stolen and turned against us! Please, recover our treasure, Spyro.”
—Titan

Titan (ドルタン=バトノマール Dorutan in Japanese) is the leader of the Peace Keeper dragons in Spyro the Dragon. He was the first Dragon to be encountered in Crystal Form by Spyro at the Peace Keepers homeworld. Once freed, he welcomed Spyro to the realm, and informed him that the treasure there had been stolen and turned into Gnorcs. Titan then instructed Spyro to recover the treasure by any means necessary.

In the Spyro Reignited Trilogy, Titan wears a kusazuri and a red cloth around his neck. He has a purple mohawk, beard, and tail tuft. He wields a large battle-axe. Titan gives off an air of an accomplished soldier, sporting epaulettes, and medals on his chest. He also has a scar on his abdomen. 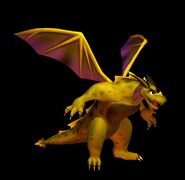 A character roster with Titan included by Rob Duenas

Retrieved from "https://spyro.fandom.com/wiki/Titan_(Spyro_the_Dragon)?oldid=115865"
Community content is available under CC-BY-SA unless otherwise noted.