Toasty (ワンダー・パンプキン 1-4 Wonder Pumpkin 1-4 in Japanese) is a Boss Realm in the Artisans Homeworld. To obtain access, you have to complete at least one other level before the dragon head will open. It is set at twilight and features a large castle that Spyro must traverse. The castle belongs to the only dragon Nevin[1], is set atop a cliff and overlooking a lake.

The shepherds from Stone Hill return in Toasty, this time with dogs instead of rams. The dogs pounce on Spyro should he get to close to them or flame them. Before you encounter Toasty, Nevin tells you that Gnasty Gnorc put one of his most devious henchmen in charge, hinting that the dragons don't know that Toasty is in fact a sheep who wears a disguise.

It is unknown why a sheep would attack a dragon, but it is believed that they are seeking revenge on them since they have served as fodder for the dragons for so long. It is possible that Toasty defected to Gnasty's side due to the dragon's cruel treatment to the flock of sheep that live in Artisans, or because Sparx, Spyro's sidekick, needs butterflies to survive (which can be found after killing sheep and other animals). 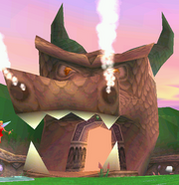 The Dragon Head which holds the portal to Toasty.

Spyro in the level Toasty in the Spyro Reignited Trilogy

The freed Artisans dragon Nevin within the level Toasty

Far view of the level Toasty.
Add a photo to this gallery

Retrieved from "https://spyro.fandom.com/wiki/Toasty_(Realm)?oldid=121311"
Community content is available under CC-BY-SA unless otherwise noted.