“Psst... Spyro... Some big Gnorcs up ahead are wearing armour, and in the ice cave armour can make their feet very slippery.”
—Todor

Todor (トロドル=バトヨワーム Torodor in Japanese) is a Peace Keepers dragon who first appeared in Spyro the Dragon.

In the Spyro Reignited Trilogy, instead of having scales, Todor has fur, complete with deer-like eyes and feathered wings. He appears rather slim with an antler-like horn-helmet, wears a winter-coat and a cloth around his stomach and carries a bow and has straps around his hands. 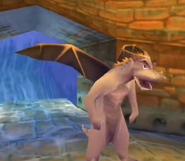 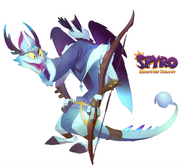 Retrieved from "https://spyro.fandom.com/wiki/Todor?oldid=123121"
Community content is available under CC-BY-SA unless otherwise noted.