“Hey, Spyro, press the jump button twice to glide and... and don't be afraid.”
—Tomas

Tomas (トルジェ=グリヨワーム Toruje in Japanese) is an Artisans dragon who appeared in Spyro the Dragon.

In the Spyro Reignited Trilogy, Tomas is a bard with a lute. He also wears a bard's hat and has a cape attached by a crystal on the chest.

After being turned into crystal by Gnasty Gnorc, Tomas was rescued by Spyro in the Artisans Homeworld. He taught the young dragon (and the player) how to glide. He also told Spyro not to be afraid of falling off mountains and such, even though the young dragon was not afraid.

Tomas has later turned into crystal again after attempting to confront Gnasty Gnorc along with several other dragons, and Spyro saved him, yet again, at Gnorc Cove. 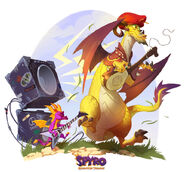 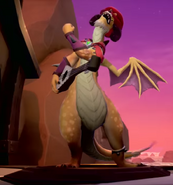 Retrieved from "https://spyro.fandom.com/wiki/Tomas_(Spyro_the_Dragon)?oldid=115848"
Community content is available under CC-BY-SA unless otherwise noted.