Tree Tops (スピード ツリー 4-3 Speed Tree 4-3 in Japanese), or Treetops, is a world that appeared in Spyro the Dragon, and later in Spyro: Shadow Legacy. In the former, it appears in the Beast Makers Homeworld.

This realm uses the Supercharge ramps to zoom in and out of the houses, and is largely considered one of the hardest realms in the entire Spyro series. It is also the first world to use Thieves which steal Gems and not Eggs. Based on tree houses with ramps, those who find controlling a faster Spyro difficult will probably dislike this place. But, you need this speed in order to get one of the hardest dragons in the game, and to catch up to those pesky Thieves. Remember: The longer you've been charging, the higher the jump will be!

As strange as it sounds, the Beast Makers have made an aerial village built atop the many gigantic limbs of a jungle’s enormous trees. These trees are huge, many yards around their trunks, and take well over a day to fully chop down using physical methods. Even magic has a hard time tumbling them! To truly see how tall they are, you would have to climb up to this large village of huts, supercharge ramps, and carved caves. To look down from up there would herald nothing to look at but a dark abyss below and the sky above is only lit by the aurora. The Tree Tops are constantly dark considering the trees’ canopies blot out the sun. Because of this, the Beast Makers have erected various torches and lanterns around the plank walkways along the limbs.

This section of Tree Tops is located in Avalar and is home to fairies. It consists of wooden platforms scattered all around the place, and has trees on which the Kerfuffle plant grows; a plant which has magical healing abilities to fairies.

First dragon and beginning of "lap"

Entering Tree Tops
Add a photo to this gallery 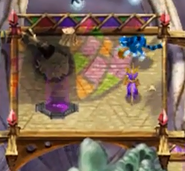 Comparison between Spyro Reignited Trilogy and the original Playstation 1 graphics

Retrieved from "https://spyro.fandom.com/wiki/Tree_Tops?oldid=108993"
Community content is available under CC-BY-SA unless otherwise noted.