Trigger Happy (トリガーハッピー Torigā Happī in Japanese), also known as Trigg, is a gremlin gunslinger who is one of the playable Skylanders in the Skylanders series, first appearing in Skylanders: Spyro's Adventure. He has a Legendary counterpart called Legendary Trigger Happy.

He also has a Series 3 counterpart called Big Bang Trigger Happy who is available in Skylanders: Swap Force.

Trigger Happy was the first Skylander outside of the original-four to be designed and is one of three Skylanders appearing in Spyro's Adventure's starter-pack. His original design had him spend his gold as an ammunition resource with a secondary ability that would pull coins towards him with the coins acting as projectiles. The psychology of spending your gold resource as ammunition proved to be too negative and would eventually contradict one of Skylander's character design tenets: spammable primary attacks that are fun no matter what. Due to some confusion with the marketing team, Trigger Happy has a french accent in the early commericals. In development, Trigger Happy was first referred to as "the Golden Cheat".

Much like the battlecruisers in Star Craft, the Golden Yamato Blast upgrade pays tribute to Leiji Matsumoto's Space Battleship Yamato. The charge up mechanic beckons back to the Melnorme Trader from Toys For Bob's classic Star Control 2.[1]

Trigger Happy's solution to every problem is being, well, trigger happy. He is a gold lover and quick triggered; a crazy gunslinger who will take down any evil doer. The gremlin always loved hearing about his friends' exploits in their fight against evil doers to the point of hopping from one foot to the other in excitement. Trigger Happy is also shown to have a sense of humor, as he always liked nothing better than to hide a sheep or two in Hugo's wardrobe most weekends to mess with the Mabu.[2]

The gremlin gunslinger is also bizarre, as he seemed to enjoy being continually frazzled during training sessions.[3]

Trigger Happy is more than his name—it's his solution to every problem. Nobody knows from where he came. He just showed up one day in a small village, saving it from a group of terrorizing bandits by blasting gold coins everywhere with his custom-crafted shooters. Similar tales were soon heard from other villages, and his legend quickly grew. Now everyone in all of Skylands knows of the crazy goldslinger that will take down any bad guy... usually without bothering to aim.

With his kooky cackle and lolloping tongue, it's hard to get much sense out of Trigger Happy. The grinning gunslinger lets his golden pistols do the talking. In fact, his response to most things is to set both barrels blazing. Trigger Happy first appeared in a tough frontier town on the furthest reaches of Skylands. The town was dirt poor and had recently been beset by a band of bully bandits. One day, having grown bored of terrorizing the townsfold with their bad breath and sheep-shearing jokes, the bandits were holding up the local bank. Outside, their dragon steeds were fired up for a quick getaway.

Suddenly, a short, stumpy stranger strolled into the high street. And after taking one look at the bandits, Trigger Happy started shooting. Gold coins sprayed everywhere, embedding themselves into the buildings and the behinds of the bandits, who promptly hightailed it out of there. The town was made instantly rich and Trigger Happy a legend. His goldslinging antics soon reached the ears of Master Eon, who immediately made him a Skylander. Trigger Happy remains true to his name, by shooting first and asking questions later. Actually, he never bothers to ask questions.[4]

Trigger Happy made a cameo as one of the Skylanders who attended Gill Grunt's concert in celebration of their latest victory over the forces of darkness. Flynn's hot air balloon soon crashlanded in Eon's garden, as the Skylanders, Trigger Happy included, ran out of harm's way.

The gremlin gunslinger later accompanied Spyro, Stealth Elf, and Drill Sergeant to the Eternal Archives with the Warrior Librarians of the Eternal Archives to help protect it. The Skylanders battled against mega-sized Chompies, but were outmatched until Kaos arrived and saved the heroes by suspending the Chompes in midair with a magic staff. When the Warrior Librarians Curator, Wiggleworth, refused to hand over a book from the Archive Kaos was after, the evil Portal Master released the mega-sized Chompies upon the heroes, but the Skylanders managed to defeat them with the help of a mega-sized Spyro.

Trigger Happy and Spyro were present with their leader, Master Eon, when Kaos and The Darkness approached. When Kaos sent his minions to destroy the Core of Light, Trigger Happy didn't appear in battle with the other Skylanders until he arrived and helped out Stump Smash fight a large number of Kaos's minions when the tree creature was outnumbered, taking out a few enemies with several shots of his dual guns. They both worked together in defeating the horde of enemies, including two Goliath Drows individually.

Just as the Skylanders were winning the battle, Kaos unleashed his Hydra, and it successfully destroyed the Core of Light. Trigger Happy, along with the other Skylanders, were banished from Skylands and sent to Earth where they were turned into toys, waiting for the new Portal Master to find them. Trigger Happy must have been the most fustrated Skylanders while in his frozen state. Always active, he can't keep still for a second. He'd probably have been thinking about getting back to Skylands as soon as he could to unleash his might golden guns.[5]

After Kaos was defeated, Spyro, Gill Grunt, and Trigger Happy were present at the Ruins with Hugo, Flynn, Cali, and Master Eon as Kaos made idle threats in his temporary prison. The three Skylanders all shared a knowing glance to one another, as Kaos rambled on vowing that he'll keep returning until Skylands was his if he was to be banished to the Outlands again. Instead, Kaos was banished to Earth where he was turned into a toy, and shortly after his departure, Spyro, Gill Grunt, and Trigger Happy celebrated their victory together.

Trigger Happy is best friends with the purple dragon, Spyro. As a result of being the few of the first modern Skylanders, Trigger Happy and Spyro have been working together a little longer than some of the other Skylanders, forming a bit more of a friendship based on longevity and shared experiences in their fight against the forces of evil.[6] In addition to their friendship, Spyro calls Trigger Happy by the nickname, 'Trigg'.

Other than Spyro, Trigger Happy is also best friends with Gill Grunt. The gremlin has also been working together with the Gillman alongside Spyro since they were some of the first modern day Skylanders.[6]

Trigger Happy can fire a barrage of gold coins at his enemies from his dual guns. He can also hurl a pot of gold, fire away at his opponents using a machine gun filled with coins, and release two yellow beams from his guns.

Trigger Happy is a frail, rapid-fire, ranged damage character. His Golden Pistols and Golden Machine Gun allow him to dispense rapid damage at long-range. His gold-hurling abilities provide a medium-range area of effect damage spell to hold enemies at bay. For his upgrade paths, he can chose to improve the power of his pistols or his gold-hurling bombing ability. However, he has very low health and no melee attacks, making him not as useful for close range. The guns (both the pistols and the machine gun) don't knock back enemies and his golen hurls have a slow rate of fire. 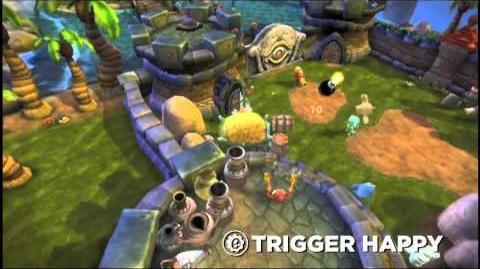 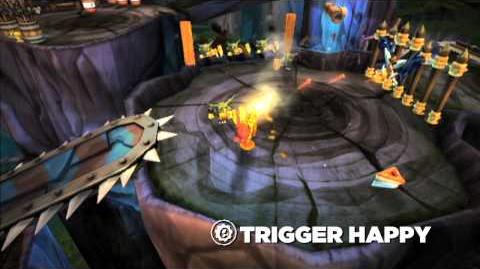 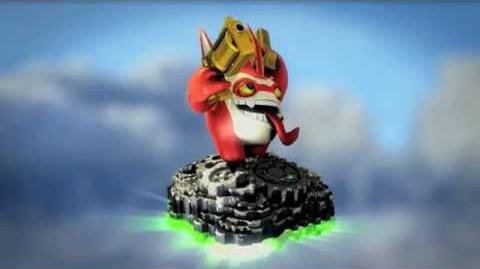 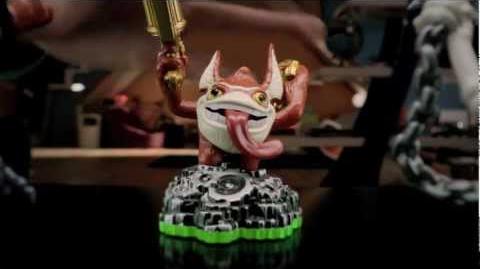 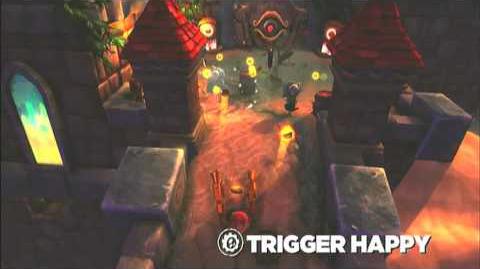 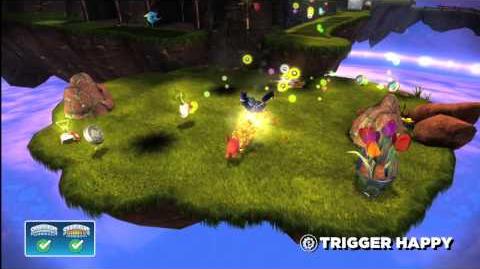 Retrieved from "https://spyro.fandom.com/wiki/Trigger_Happy?oldid=121442"
Community content is available under CC-BY-SA unless otherwise noted.