Trolls are one of the strongest enemies in The Legend of Spyro: Dawn of the Dragon. They are the heavy hitters in Malefor's Army. Their immense size and strength make up for their lack of maneuverability and wit.

In the Ruins of Warfang, there is a regular Troll and an elite troll. However, fighting the elite troll is optional.

Trolls can be subdued easily by Spyro's Electricity Breath. Other attacks can damage it, and Electricity is ideal for a quick victory.

The first Troll Spyro and Cynder faced was the one who managed to push its way through the gates of the Dragon City during the battle between the citizens of Warfang and Malefor's army. It immediately caused havoc inside the city walls, attacking Hunter on first sight, before being killed by the combined efforts of Spyro and Cynder. Trolls later appeared in the Ruins of Warfang and The Burned Lands.

Trolls are dangerous opponents when left undefeated, as they have the ability to leap great distances over to Spyro and Cynder when they're far away, and slam their massive fist on them to cause heavy damage. The Trolls also attack by slamming their heavy fists on their targets and sometimes strike them away when they're in flight. Also, you can strike it with a lightning bolt which will stop it from attacking, then you can deliver a few fast swipes. 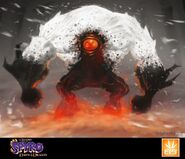 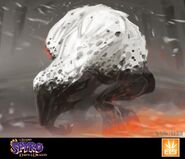 Early concept of a Troll by Veronique Meignaud 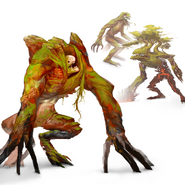 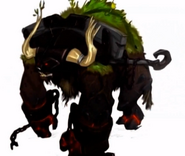 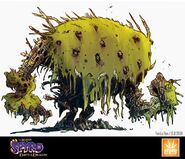 Color concept of a Troll by Veronique Meignaud 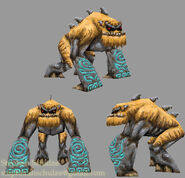 DS model of a Troll by Stephen Schulze
Add a photo to this gallery
Retrieved from "https://spyro.fandom.com/wiki/Trolls_(Dawn_of_the_Dragon)?oldid=124841"
Community content is available under CC-BY-SA unless otherwise noted.