“This guy/Doctor Shemp thinks he's so cool. You don't know what it's been like listening to him over and over. But I'll tell ya one thing, he should watch his back.”
—Trondo

Trondo (トロダル=バトヨワーム Torodaru in Japanese) is a Peace Keepers dragon who appears in Doctor Shemp, right before the boss. When freed, he rants to Spyro about Doctor Shemp and hints at his weakness.

In the Reignited Trilogy, Trondo has more of a raggedy appearance. He has scaley dreadlocks, wears a bandana, a brown feather-rimmed cloth around his waist, weapon bags via straps across his chest and wields a kunai. He has bandages on both hands and feet. 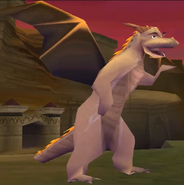 Trondo as he appears in some early builds 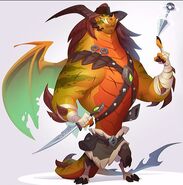 Retrieved from "https://spyro.fandom.com/wiki/Trondo?oldid=123122"
Community content is available under CC-BY-SA unless otherwise noted.