Turtles are the creatures who appeared in few games of the original Spyro games, before making a reappearance in the Skylanders series.

Turtles appear as natives of Sunny Beach in Avalar. The elder turtles are leaders of Sunny Beach and their turtle tribe, and can seen meditating on the cushion of their inner shells. Other turtles, larger ones, can serve as a platforms but have to be persuaded to move with the use of flames or a charge, or they will try and walk back to where they were originally standing. The elder Turtles want their babies free from the invasion of the Water Workers, so Spyro has to guide them to freedom.

Turtles also appear in Year of the Dragon in Crystal Islands as fodder.

A female turtle appears as a denizen of the Coastal Remains, in which Spyro helps rescue her children from predators.

Turtles are one of the giant, native creatures in Skylands, but they are mostly immobile. They only move as a result of a shove from a passerby.[1] They are totally laid-back and never, ever rush anywhere (some might even call them lazy).[2]

In the certain console versions of Skylanders, large turtles are seen in numerous levels of the games where they have to be pushed or moved about in order to solve puzzles. They can also be used as a bridge for the Skylanders to walk on to areas they can't reach. The turtles also seem to be fear only the Skylanders, as they do not hide inside their shells when they are approached by Mabu.

One of the Skylanders, Warnado, is an also turtle enhanced by the element of Air.

Concept Art of the Turtles in Skylanders 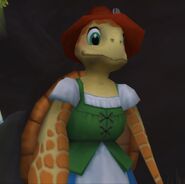 The Turtle Mother in Spyro: A Hero's Tail

Turtle fodder in Spyro: Year of the Dragon

Retrieved from "https://spyro.fandom.com/wiki/Turtles?oldid=105651"
Community content is available under CC-BY-SA unless otherwise noted.