The Twin Fire Dragons are two evil dragons created by the Sorceress to kill Handel. They only appeared in Spyro: Year of the Dragon in the Fireworks Factory.

The powerup next to Handel is the Superflame-Superfly Combo powerup; this time, the effects will last until you leave the area. The Fire Dragons will regain health if left unharmed too long, so focus on one at a time. Once you have destroyed both of them, Handel will give you a dragon egg (Evan). 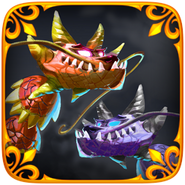 Trophy image of the Twin Dragons

Retrieved from "https://spyro.fandom.com/wiki/Twin_Fire_Dragons?oldid=123054"
Community content is available under CC-BY-SA unless otherwise noted.