“Thank you for releasing me.”
—Unika

Unika (ユニ=ドリフーチョ Uni in Japanese) is a Dream Weavers dragon who first appeared in Spyro the Dragon. He is imprisoned in the realm of Jacques, can be found by gliding through a certain path, or using Spyros jump/charge to get on a high platform early and gliding over, or you can hit the Fool holding it up.

In Spyro Reignited Trilogy, he appears to be more heavy, and has a moustache and beard. He is carrying a harp, his horns are now white with gold decorations, has a navy-blue and gold trimmed cloth around his neck with tassels, and nobs on his tail like a violin. 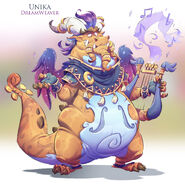 Retrieved from "https://spyro.fandom.com/wiki/Unika?oldid=111741"
Community content is available under CC-BY-SA unless otherwise noted.