“Ssso, that old fool Ramsssesss sssent you, did he? You've come to take the Dragon Throne from me, have you? Well it'sss mine, do you hear me?! Sssstay away...”
—Vathek

Vathek is an Undead dragon and the main antagonist of Dragon's Peak in the console versions of Skylanders: Spyro's Adventure. He is the evil brother of the current Dragon King, Ramses.

Vathek was originally planned to be a Skylander in Spyro's Adventure, but the role of the Undead Dragon Skylander was already taken by Cynder. Toys For Bob also concluded that the Undead element was best suited for him.[1]

Villainous and truly horrible in personality, Vathek is an evil dragon who would do whatever it takes to become king of Dragon's Peak, even willing to betray his own brother to achieve his goal. When positioned as Dragon King, he becomes strongly possessive of the Dragon Throne, even becoming dependent on its power. Instead of confronting the Skylander directly, Vathek keeps his distance while using the Throne's power to summon the creatures who are loyal to the Throne to do the fighting for him, only choosing to battle the Skylander himself as a last resort if all else fails.

Although not demonstrating his powers in the console versions, Vathek possesses the ability to blast fireballs in the 3DS version of Spyro's Adventure. He also had the ability to teleport and reappear in a puff of smoke.

Vathek is a horrible dragon who always wanted to be king of Dragon's Peak. When his brother, Ramses, was throned as king instead, Vathek sought out to claim the Dragon's Throne for himself, becoming feared among the other dragons who dread that the evil dragon would one day try to steal the Throne.

His opportunity to claim the Dragon's Throne was given when Flavius went flying with Ramses one day. While the two dragons were gone, Vathek took the chance to sit on the Throne (in which he who sits on the throne rules all of Dragon's Peak). With the power of the Dragon's Throne, Vathek became king of the Peak and then betrayed Ramses by turning his brother into stone.

Atop of the Elder Dragon Throne, Vathek was soon confronted by the Skylander, who was sent by Ramses to stop the evil dragon. The Undead dragon claimed that the Dragon Throne was his, and sent his henchmen to defeat the Skylander as punishment for their 'treachery'. But even after summoning more enemies with the power of the Dragon's Throne, the Skylander managed to defeat them all. Furious by his minions' failure to stop the Skylander, Vathek decided to confront the Skylander himself and engage them in battle, leaping off of the Dragon Throne. Before Vathek can begin his attack on the Skylander, Flavius swooped in and took the Throne, using its power to turn Vathek to stone as punishment for betraying Ramses. Afterwards, Ramses sadly pondered on what to do with Vathek, at first suggesting banishment, but dismissed the idea when Flavius mentioned that the frozen Vathek would make a "good statue".

Although having no specific role in the Dragon's Peak area, Vathek flew through the skies of The Wingwarrens as the Skylander made their way through the lands. At the top of the Peak, Vathek appeared and engaged the Skylander in battle, with the Skylander emerging victorious.

As the boss fight between Vathek and the Skylander commences, the Skylander's primary and secondary attacks do little damage to the Undead dragon. To deliver bigger damage, the Skylander have the option to fire at the bombs and sheep that slide into the arena by the waterfalls on the side to send them flying at Vathek to damage him. However, Vathek will occasionally blast fireballs at the Skylanders and will often shield himself with his wings to protect himself from the projectiles, so you'll have to launch the projectiles at the right time when the evil dragon lowers his wings to attack. Once he is inflicted with enough damage, Vathek will be defeated.

“Those minionsss are sssuch weaklingssss! But you can't keep defeating them forever! A few more sssshould do the job.”
—Vathek

“These minionsss are loyal to the Throne. THEY will punish you for your treachery.”
—Vathek

“Oh no!! I can't believe I fell for the oldessst trick in the book!”
—Vathek

Enraged that the minions loyal to the Dragon Throne failed to stop the Skylander, Vathek takes matters into his own claws and jumps down from the Throne to face the Skylander himself. 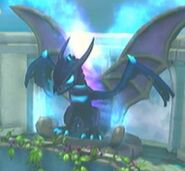 Vathek roars in disbelief as he is turned to stone by the power of the Dragon Throne used by Flavius.

Vathek as a stone statue
Add a photo to this gallery

Retrieved from "https://spyro.fandom.com/wiki/Vathek?oldid=125768"
Community content is available under CC-BY-SA unless otherwise noted.